Listening with his camera: The late photographer Don Hunstein captured a golden age of music

Via the Daily Hampshire Gazette 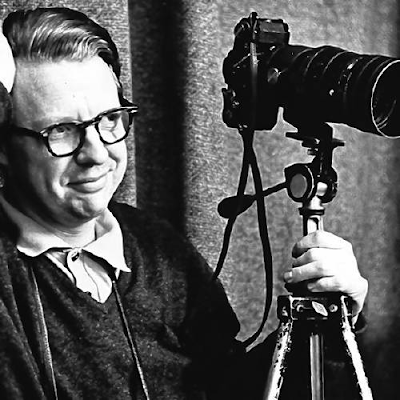 Portrait of the artist: Photographer Don Hunstein took many iconic shots of musicians from the late 1950s to the 1980s by putting them at ease. Image courtesy cdeVision

It’s arguably one of the most iconic album covers of all time, certainly in the folk and pop world: a young Bob Dylan, on the cusp of stardom, walks down a slushy street in Greenwich Village in New York City, hands in his pockets and shoulders hunched against the cold, as his girlfriend, Suze Rotolo, clings to his left arm.

That image, from the 1963 disc “The Freewheelin’ Bob Dylan,” came out of a session that Don Hunstein, a longtime director of photography for Columbia Records, had staged with Dylan in the singer’s nearby apartment, capturing the rising folk star as he played his acoustic guitar, sprawled in a beat-up armchair, and tried at one point to smoke and sing at the same time — another memorable shot

Those are just two of hundreds of impressive images that are now preserved on a website dedicated to Hunstein’s work, a site put together by Hunstein’s daughter, Tina Cornell, who lives in Florence with her family, and cdeVision, a Holyoke web studio specializing in advertising, website design and more.

Along with taking many shots of Dylan in his early career, Hunstein, who died in 2017, photographed a huge array of stars on Columbia’s roster from the late 1950s into the 1980s: Billie Holiday, Aretha Franklin, Miles Davis, Dave Brubeck, Barbara Streisand, Simon and Garfunkel, Johnny Cash, Janis Joplin, Billy Joel.

The photographer also shot hundreds of album covers, including Loretta Lynn’s memorable “Coal Miner’s Daughter” from 1970, as well as the records of classical musicians including pianist Glenn Gould.

Hunstein, born in 1928 in Missouri, grew up in St. Louis but settled in New York in the 1950s. He made his mark as a documentary photographer — his adopted home was a favorite subject — whose unobtrusive style, Cornell says, helped put his subjects at ease.

As one of his obituaries noted, “Don had the ability to listen with his camera. Instinctively he under stood that to capture artists at their best moments, patience, trust and humility were needed.”

Now Cornell and her mother, DeeAnne Hunstein, who also helped develop the website, are hoping to bring some more attention to Hunstein’s work, in turn highlighting an era when photography became an important tool for documenting the cultural history of music.

“My dad was humble to a fault, just very self-effacing,” Cornell said during a recent phone call. “He didn’t act like a fan [of musicians] or put himself out there like he was some kind of big shot … He saw this as a job, and he always said he was lucky to be at the right place at the right time.

“And yet he created all these great images,” she noted. “People liked him — they felt comfortable around him, he was good at making a joke, and that’s why he was able to do what he did.”

Case in point: Cornell says Johnny Cash could sometimes be testy with reporters and photographers, but her father and the gritty country singer hit it off, with Cash inviting Hunstein to visit him on his Texas ranch in the late 1950s.

Though Hunstein mostly took black and white photos, his website offers a couple especially atmospheric images of Cash in color. In one, wearing a checked shirt and a straw hat, he leans on a worn wooden fence rail and looks off moodily into the distance. In another, the singer, this time decked out in dark suit and white shirt, sits with his guitar on a huge woodpile, his nearby open guitar case revealing a bright purple interior.

“I love that mix of colors!” Cornell said.

hen there’s the near-silhouette of jazz great Thelonious Monk, hunched over a piano, a cigarette dangling from his mouth (there was a lot of smoking in Columbia’s studios in those days). And Cornell says one of her father’s favorite photos was an image he took of Duke Ellington, his “all-time hero,” as she puts it.

“My dad used to say he was really lucky to have this job, because he was such a huge music fan himself,” she said.

‘Don Hunstein did all this?!’

Bill Alatalo, a co-partner of cdeVision with Antonio Costa, says the company actually first designed a website for Hunstein’s work perhaps a dozen years ago after Cornell first approached them. It was a simpler affair, with far fewer images, Alatalo notes, in part because Cornell and her mother were busy at the time trying to help Hunstein, who struggled with Alzheimer’s disease for about a decade before his death.

Then Cornell got back in touch about a year ago, Alatalo said, and asked if cdeVision could develop a new site. “The old one kind of got lost in the shuffle, and at this point Tina had a lot more photos for us to work with,” he said. “Antonio and I were amazed — we were like, ‘Don Hunstein did all this?!’ ”

As a music lover and record collector himself, Alatalo says the Hunstein website “has just been a cool project to work on, to really give it some play and give people a better sense of what he did.” The website also dovetails with other music-related work cdeVision has done in recent years, Alatalo said, such as designing a new site for Hawks & Reed Performing Arts Center in Greenfield.

For Cornell, who was born in 1968, her father’s website is a deeply personal project. She was inspired by his work as she got older, she says, and studied photography herself as well as drawing and painting. She came to the Valley about 20 years ago with a former partner, and the couple had plans then to create a pottery studio. Today she works as a jeweler and goldsmith and also is involved with a local chapter of an environmental group, Mothers Out Front.

She can remember going as a kid to her father’s studio at Columbia Records, then located in a building on 52th Street near 5th Avenue in Manhattan, and “playing with the props” while her dad was arranging shots of various artists.

“It wasn’t until I was older that I really developed an awareness of the full scope of his work,” she said.

Cornell and her mother have also established the new website as a means of protecting the provenance of Hunstein’s work. Some of his photos now crop up online, such as on people’s Instagram sites, and go uncredited, she noted, and she’s had to ask people to remove the pictures.

In addition, the Sony Corp. bought Columbia Records (and Columbia Pictures) in the late 1980s, acquiring all of Hunstein’s work for the record label, and Cornell and her mother have since worked with Sony to gain access to many of those images.

Ultimately, Cornell says, the website is designed to reacquaint people with her father’s work and his era as a photographer. He never took to computers or digital photography, she notes, instead working with contact sheets in his darkroom, giving his photos a distinctive style and pedigree that she believes is worth commemorating.

More are added to the website regularly, she says, and the site also has many images her father took of Puerto Rican communities in New York City in the early 1960s, part of a book project for an English publisher.

“My dad was just a huge part of my life,” she said. “This is my way of honoring that.”