Louis-Jacques-Mandé Daguerre (1787–1851) and the Invention of Photography 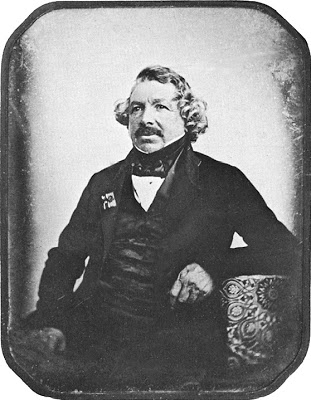 On November 18, 1787 Louis-Jacques-MandÃ© Daguerre was born, and he would later create a process that would revolutionize the art world.

Department of Photographs, The Metropolitan Museum of Art


On January 7, 1839, members of the French AcadÃ©mie des Sciences were shown products of an invention that would forever change the nature of visual representation: photography. The astonishingly precise pictures they saw were the work of Louis-Jacques-MandÃ© Daguerre (1787â€“1851), a Romantic painter and printmaker most famous until then as the proprietor of the Diorama, a popular Parisian spectacle featuring theatrical painting and lighting effects. Each daguerreotype (as Daguerre dubbed his invention) was a one-of-a-kind image on a highly polished, silver-plated sheet of copper.


Daguerre's invention did not spring to life fully grown, although in 1839 it may have seemed that way. In fact, Daguerre had been searching since the mid-1820s for a means to capture the fleeting images he saw in his camera obscura, a draftsman's aid consisting of a wood box with a lens at one end that threw an image onto a frosted sheet of glass at the other. In 1829, he had formed a partnership with NicÃ©phore NiÃ©pce, who had been working on the same problemâ€”how to make a permanent image using light and chemistryâ€”and who had achieved primitive but real results as early as 1826. By the time NiÃ©pce died in 1833, the partners had yet to come up with a practical, reliable process.


Not until 1838 had Daguerre's continued experiments progressed to the point where he felt comfortable showing examples of the new medium to selected artists and scientists in the hope of lining up investors. FranÃ§ois Arago, a noted astronomer and member of the French legislature, was among the new art's most enthusiastic admirers. He became Daguerre's champion in both the AcadÃ©mie des Sciences and the Chambre des DÃ©putÃ©s, securing the inventor a lifetime pension in exchange for the rights to his process. Only on August 19, 1839, was the revolutionary process explained, step by step, before a joint session of the AcadÃ©mie des Sciences and the AcadÃ©mie des Beaux-Arts, with an eager crowd of spectators spilling over into the courtyard outside.

The process revealed on that day seemed magical. Each daguerreotype is a remarkably detailed, one-of-a-kind photographic image on a highly polished, silver-plated sheet of copper, sensitized with iodine vapors, exposed in a large box camera, developed in mercury fumes, and stabilized (or fixed) with salt water or "hypo" (sodium thiosulphate). Although Daguerre was required to reveal, demonstrate, and publish detailed instructions for the process, he wisely retained the patent on the equipment necessary to practice the new art.

From the moment of its birth, photography had a dual characterâ€”as a medium of artistic expression and as a powerful scientific toolâ€”and Daguerre promoted his invention on both fronts. Several of his earliest plates were still-life compositions of plaster casts after antique sculptureâ€”an ideal subject since the white casts reflected light well, were immobile during long exposures, and lent, by association, the aura of "art" to pictures made by mechanical means. But he also photographed an arrangement of shells and fossils with the same deliberation, and used the medium for other scientific purposes as well. The journalist Hippolyte Gaucheraud, in a scoop that appeared the day before daguerreotypes were first shown to the AcadÃ©mie des Sciences, wrote of having been shown the image of a dead spider photographed through a solar microscope: "You could study its anatomy with or without a magnifying glass, as in nature; [there is] not a filament, not a duct, as tenuous as might be, that you cannot follow and examine." Even Arago, director of the Observatoire de Paris, was reportedly surprised by a daguerreian image of the moon.

Neither Daguerre's microscopic nor his telescopic daguerreotypes survive, for on March 8, 1839, the Dioramaâ€”and with it Daguerre's laboratoryâ€”burned to the ground, destroying the inventor's written records and the bulk of his early experimental works. In fact, fewer than twenty-five securely attributed photographs by Daguerre surviveâ€”a mere handful of still lifes, Parisian views, and portraits from the dawn of photography.

Source: Daguerre (1787â€“1851) and the Invention of Photography
Thematic Essay
Heilbrunn Timeline of Art History
The Metropolitan Museum of Art