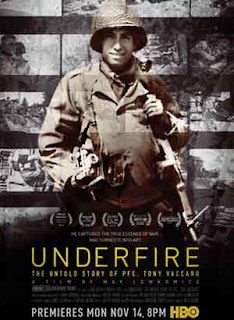 In association with the current exhibition "Tony Vaccaro at 98", Monroe Gallery is pleased to offer FREE streaming of the acclaimed documentary "Underfire: The Untold Story of PFC Tony Vaccaro".

This offer is limited, please contact the Gallery for details.

In 1943, with the Allied invasion of Europe imminent, a newly drafted 21-year old Tony Vaccaro applied to the U.S. Army Signal Corps. He had developed a passion for photography and knew he wanted to photograph the war. “They said I was too young to do this,” Tony says, holding his finger as if taking a photo, “but not too young to do this,” turning his finger forward, pulling a gun trigger. Not one to be denied, Tony went out and purchased a $47.00 Argus C3, and carried the camera into the war with him. He would fight with the 83rd Infantry Division for the next 272 days, playing two roles – a combat infantryman on the front lines and a photographer who would take roughly 8,000 photographs of the war.

In the decades that followed the war, Tony would go on to become a renowned commercial photographer for magazines such as Look, Life, and Flair, but it is his collection of war photos, images that capture the rarely seen day-to-day reality of life as a soldier, that is his true legacy. Tony kept these photos locked away for decades in an effort to put the war behind him, and it wasn’t until the mid-1990s that this extraordinary body of work was first discovered and celebrated in Europe. In the United States, however, Tony has yet to receive his due and few people have heard of him.

The film tells the story of how Tony survived the war, fighting the enemy while also documenting his experience at great risk, developing his photos in combat helmets at night and hanging the negatives from tree branches. The film also encompasses a wide range of contemporary issues regarding combat photography such as the ethical challenges of witnessing and recording conflict, the ways in which combat photography helps to define how wars are perceived by the public, and the sheer difficulty of staying alive while taking photos in a war zone.

Though the narrative spine of the film is a physical journey in which Tony brings us to the places in Europe where many of his most powerful photos were taken, over the course of the film we also trace Tony’s emotional journey from a young GI eager to record the war to an elderly man who, at 93, has become a pacifist, increasingly horrified at man’s ability to wage war. Tony believed fiercely that the Allied forces in WWII were engaged in a just war, but he vowed never to take another war photo the day the war ended, and he didn’t.

In addition to numerous interviews with Tony, interviewees include Pulitzer Prize-winning photojournalists Tyler Hicks and Lynsey Addario; Anne Wilkes Tucker, a photography curator and curator of the comprehensive exhibition WAR/PHOTOGRAPHY; James Estrin, a Senior Photographer for the New York Times and editor of the Times’ Lens blog; and John G. Morris, who was the photo editor of Life Magazine during World War II and was Robert Capa’s editor.