"Magnetic West: The Enduring Allure of the American West," which is organized by the Figge Art Museum, Davenport, Iowa, is the first photography exhibition of this scale organized and presented by an Iowa museum. The exhibition explores the complicated history of the United States from the Mississippi River to the Pacific Ocean and touches on five interwoven themes: An American Eden, Theme and Variation, Identity and Experience, Going West and Home on the Range.

Art Center Curator Mary Anne Redding said the earliest images in the exhibition are from the 1860s and 1870s. She said those images were used to create national parks and monuments in the late 1800s.

"That was Andrew (Wallace's) premise for starting to look at how photography influenced then and continues to influence now how we understand the West," Redding said of Wallace, the Figge's director of collections and exhibitions, who curated "Magnetic West."

Mary Anne Redding, curator at the Sioux City Art Center, gestures toward "How the West Was One" by William Wilson while discussing the center's new exhibition, "Magnetic West."

"Traditionally, we have a Western European idea of what the West is, and so, a lot the photographs in this exhibition really say there are other voices that need to be part of this narrative," she said. "I do think that is the strength of the show."

You'll see DinÃ© photographer William Wilson's self-portraits and a New Mexico moonrise by Ansel Adams, as well as photographs that touch on different aspects of Western life, including rodeo, architecture, car culture and demonstrations against the Dakota Access Pipeline. 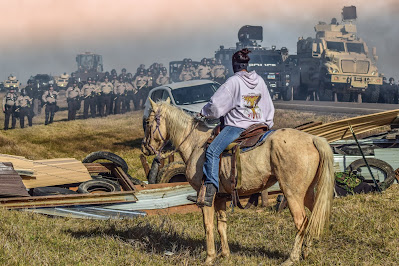 "In a lot of ways, these issues have never been resolved and we're still trying to figure it out," said Redding, who also worked with the Sioux City Public Museum to select 14 additional photographs for an auxiliary exhibition, which grounds the issues depicted in "Magnetic West" in Siouxland.

Redding said the kinds of photographs included in "Magnetic West," which range from gelatin silver photographs to digital prints, are just as diverse as the subject matter. She pointed to a photograph of the Cerrillos Hills outside of Santa Fe, New Mexico, which was taken by movie director Wim Wenders when he was scouting movie locations in the Southwest.

"It's so cinematic and it's just so romantic," she said.

What really ties the whole show together, Redding said, are the same locations and iconic symbols of the West that photographers, both amateur and professional, are drawn to again and again, such as the Golden Gate Bridge and American bison.

"There's something for everyone to see. There's so many different points of entry," said Redding, who noted this is the last chance to see the exhibition, which debuted at the Figge over the summer. "It's here now through January 17, and then, all these photographs go back to their original owners, be it other museums, private collectors, the Figge."