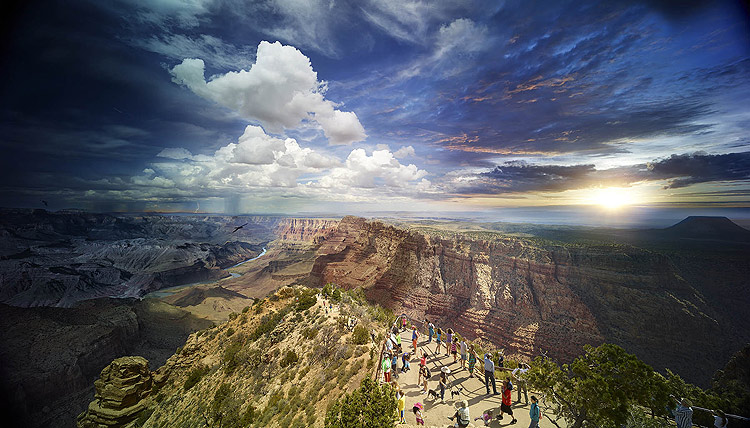 Photographing from the Desert View Watchtower, Wilkes made this image of the South Rim of the Grand Canyon in 27 hours. This vantage point allowed him to see the scale of the people along the overlook.

Piecing Together Time in the ‘Ultimate Brain Puzzle’

"A single image in Stephen Wilkes’s “Day to Night” series is composed of an average of 1,500 frames captured by manual shutter clicks over a period of anywhere from 16 to 30 hours. During this process, Wilkes must keep his horizon line straight and maintain continuity, which means keeping his camera perfectly still.

He then spends weeks in postproduction, piecing the best frames together into a final composite of layered images, essentially compressing time. For Wilkes, the excitement is in showing people something more than a photograph, something that provides a multidimensional experience, a window, as he describes it, into a world where the full spectrum of time, light, and experience plays across the frame. We’re treated to a view we’ve never seen before—one our eyes could never take in on their own." Full post here.

Wilkes and his assistant spent 30 hours perched on a platform 18 feet in the air, behind a crocodile blind so the animals wouldn’t see them. The elephant family marched across the frame just as he and his assistant had resumed shooting after taking a break to backup their files (each shoot takes about 20 gigabytes of storage). Had they passed five minutes earlier, he would have missed them

Monroe Gallery will be exhibiting Stephen Wilkes’ "Day To Night" photographs featured in the January, 2016 issue of National Geographic during photo l.a. 2016, as well as selections from Wilkes' recent Remnants collection.