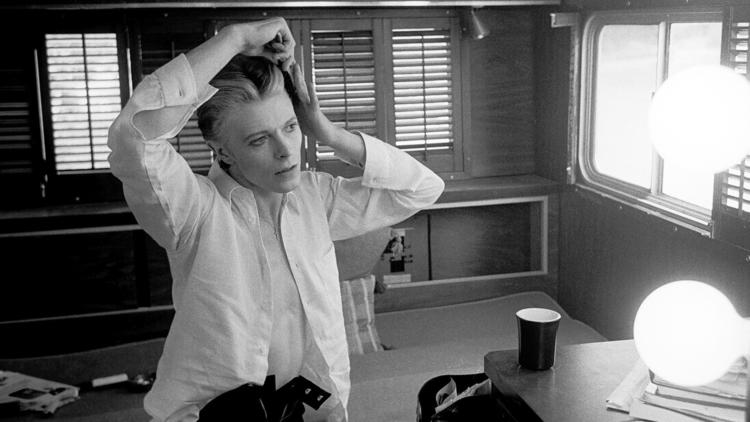 David Bowie in his dressing room while filming "The Man Who Fell to Earth" in 1975.
(Steve Schapiro)
The Chicago Tribune
By Rick Kogan
January 14, 2016

World-renowned photographer Steve Schapiro, who moved to Chicago with his wife, Maura, in 2007, has in his lengthy career taken millions of photos, many of them collected in stunning books.

He also shot David Bowie. One of his photos was used for the cover of 2014's "Nothing Has Changed" and, in the wake of the artist's death, Schapiro remembered:

"It was 1974 when I first photographed David. From the moment he arrived, we seemed to hit it off. He was incredibly intelligent, calm, and filled with ideas.

"He talked a lot about Aleister Crowley, whose esoteric writings he was heavily into at the time. And when he heard that I had photographed Buster Keaton, one of his heroes, we talked about him and immediately became friends.

"Our first session started at four in the afternoon. David would come out in incredible costumes, each seemingly turning him into a different person. I would raise my camera to shoot and he would say, 'Wait just a minute, I have to fix something,' and 20 minutes later he would come out in a totally different outfit.

"We decided to do a close portrait on a dark green background because we felt it would make the worst possible color for a magazine cover. We laughed about it, but eventually it did become a cover for People magazine (in September of 1976).
David Bowie
A portrait of David Bowie, taken by Steve Schapiro.
"That session lasted from four in the afternoon to four in the morning, and the last photograph of David was on his bike, lit by the headlights of a car.

"Over these many years I would find photos of David in my files, photos that I had totally overlooked, unexpected and pleasant surprises. Working with an amazingly talented person can be collaborative, often unspoken. The photographs I took were David's ideas, brought from his imagination into the real world. I was merely the conduit from genius into the light of day."

Copyright Â© 2016, Chicago Tribune
Steve Schapiro's photographs of David Bowie are included in the exhibition "The Broke The Mold", on view through February 7, 2016.