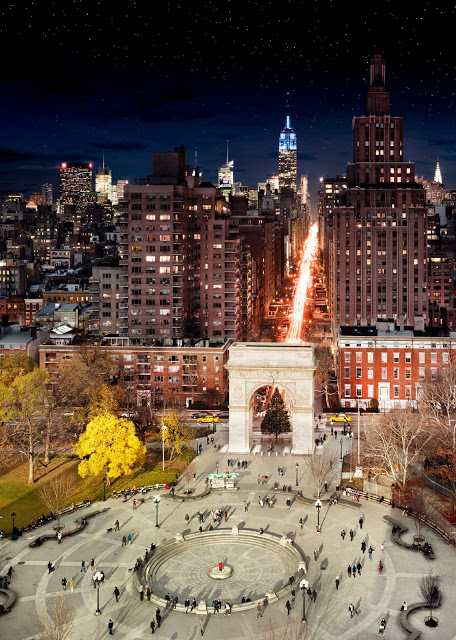 This photograph is in the current issue of New York magazine (although somewhat obscured by "10 Reasons To Love New York" text!). It continues Wilkes' experimentation of changing time withing a photograph.
In a recent interview with F-Stop, Wilkes explained:
"Changing time in a single photograph is a very interesting concept. The genesis of this idea really happened many years ago when I was working for Life magazine on “a big picture”. They hired me to photograph Claire Danes and Leonardo Dicaprio as Romeo and Juliet, and I had an opportunity to photograph them along with the entire cast and crew in Mexico City where they were filming. We spent about four days waiting to actually get the entire cast and crew into this one photograph and Life had asked me to create a panoramic gatefold. When we got to the set, I realized that the set was actually a huge square. So I decided to take the square and break it apart, ala David Hockney, using individual images. I ended up shooting over 250 images that I pasted together by hand. The interesting time aspect came into play when in the centre of the photograph is where the stars are, Leonardo Dicaprio and Claire Danes, they
literally in a moment of embrace when everybody else, cast and crew, is surrounding them. To the right side of the photograph is a huge mirror, probably 20 feet in height. I asked them to kiss for the reflection image. So the reflection does not match the centre embrace, they are kissing in the reflection. When you look at the photograph quickly you think the image in the mirror is a reflection. But then you realize that the reflection is a time change and a completely different moment. That idea stayed with me for a while. "

Here are the photographs: 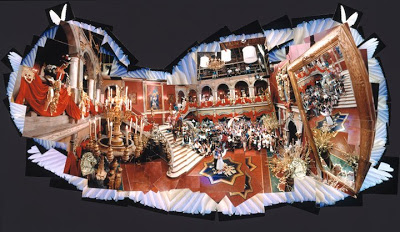 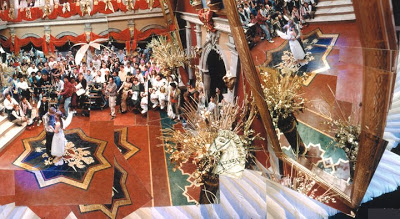 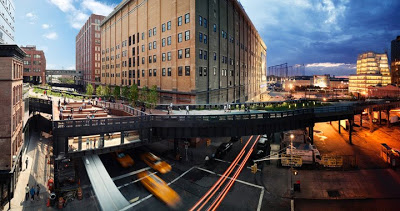 As Wilkes explained in the F-Stop interview:
"The shot appealed to Wilkes because of the “intimacy” it offered with the buildings. But shooting from rooftops didn’t satisfy him. “Everything was a little too high,” he said. “I was losing the intimacy.” So he shot from a cherry picker at points throughout the day, then worked with a retoucher to electronically blend the images together. He wanted to capture the floating, expansive feeling that had drawn him to the Highline to begin with, and settled on a 17th Street location. This ended up being key, as the other challenge of the shoot was finding an effective transition point between day and night shots. Wilkes picked a good spot.

Wilkes shot this image using a 39 megapixel digital back on a 4 x 5 camera. He embraces large-format photography because it gives his all-important details greater depth. “So much of my work is about levels of story,” he says. He rotated the camera manually on a tripod throughout the day as he shot tons of images of the Highline while different street scenes unfolded within his frame (“The last thing you want to do is come back to the studio and have this great picture but realize you’re missing something”). He varied his exposure throughout, keeping a constant f-stop but varying the shutter speed to allow for proper exposure as the sun set. Periodically he and his retoucher, who was in the cherry picker with him, would load images onto a laptop and start creating rough comps to make sure he was getting what he needed."

To see more of Stephen Wilkes' work, please click here. The full collection of  "New York, Day To Night" will be exhibited at Monroe Gallery of Photography April 27 - June 30, 2012