NY Times: Capitol Police Officer Eugene Goodman Recounts How He Held Off the Mob on Jan. 6. 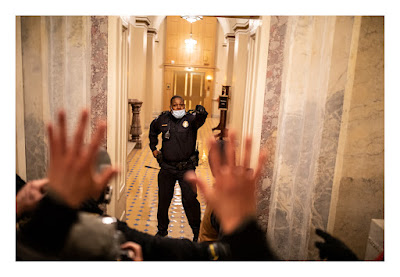 Ashley Gilbertson
Officer Goodman, The Stroming of the Capitol, January 6, 2020

"Officer Goodman, whose heroism was captured in widely circulated video recorded by a reporter inside the Capitol, said rioters sprayed him with what he believed to be bear spray, threw objects at him and tried to shake him and other officers off some scaffolding during the storming of the building. He also recounted throwing up in reaction to the tear gas deployed by the Metropolitan Police when they arrived to reinforce the Capitol Police, who had been overrun.

“It looked like something out of medieval times, where you see one big force fighting another force,” Officer Goodman said."