On the campaign trail

Via The Albuquerque Journal
October 18, 2020
By Kathaleen Roberts 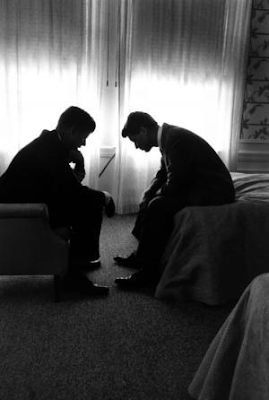 Presidential candidate Jack Kennedy conferring with his brother and campaign organizer Bobby Kennedy in a hotel suite as they are silhouetted by the sunlight coming through the drawn window drapes. Photo by Hank Walker/The Life Picture Collection. (Courtesy of The Monroe Gallery Of Photography)
ALBUQUERQUE, N.M. â€” As the pandemic forces our politics into virtual reality, a Santa Fe gallery is taking a look back at the grueling, crowded and ultimately dangerous presidential campaigns of decades past.
Open at Santa Feâ€™s Monroe Gallery of Photography, monroegallery.com, â€œThe Campaignâ€ explores the human dimension of the process by which Americans choose their presidents. These photographers sought (and often got) an intimate access far beyond the campaignsâ€™ carefully curated images. The images will remain online through Nov. 15.
â€œReporters listen, photographers look,â€ the late photojournalist Bill Eppridge said about the 1968 Robert F. Kennedy campaign.
â€œYouâ€™re searching for a perspective everybody isnâ€™t getting,â€ gallery co-owner Sidney Monroe said. â€œYouâ€™re trying to get something beyond their image machine. Itâ€™s grueling.
â€œCampaigns were not as big; they were not as fast,â€ gallery co-owner Michelle Monroe added. â€œYou could do a cross-country train trip. Everything now is not staged, but they try to control it. The very relationship with the press has changed everything â€“ when you think of the press being complicit in hiding (Franklin) Rooseveltâ€™s disability.â€ 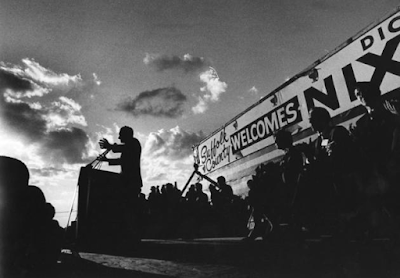 Richard Nixon giving a speech to the residents of Suffolk County, New York, while on the 1968 campaign trail. By Irving Haberman.
Not a comprehensive exhibit, the show features only the artists in the galleryâ€™s stable and their most significant campaigns.
The exhibition examines a time when photographing presidential campaigns often required patience and endurance: long days were the norm, and getting beyond the carefully constructed stagecraft and tightly scripted events proved difficult. Campaign staff and security frequently monitored (and controlled) the movement of media; capturing iconic visual symbols of democracy in action was the forte of the successful campaign photograph.
Hank Walkerâ€™s 1960 silhouette of John and Robert Kennedy conferring in a Los Angeles hotel bedroom shows the two brothers in deep conversation. Walker covered the campaign for Life magazine.
â€œBobby was acting as campaign manager for Jack,â€ Sidney Monroe said. â€œThatâ€™s the moment Jack told Bobby he had chosen (Lyndon) Johnson as the vice presidential candidate. Bobby and Johnson were sworn enemies.
â€œLater, in the hallway, Walker saw Bobby storm out, swearing, â€˜Sâ€”, sâ€”, sâ€”.â€™ â€
â€œJack thought it was the only way he could win Texas,â€ Michelle added. â€œBobby referred to Johnson as â€˜an animal.â€™ â€ 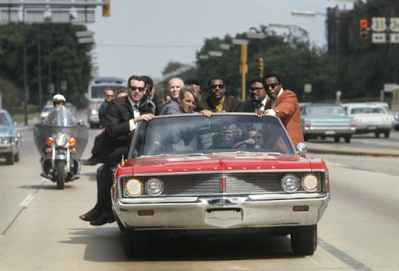 Sen. Robert F. Kennedy and members of  the â€œFearsome Foursomeâ€ of the Los Angeles Rams football team in Indianapolis, 1968. By Bill Eppridge.
Joe McNallyâ€™s 1988 portrait of then-presidential candidate Joe Biden riding a train captures the candidate in a contemplative mood.
â€œIt was also after Biden had suffered an aneurysm and this was his return,â€ Sidney said. â€œ(McNally) said he came across as a stoic, very relatable candidate.â€ 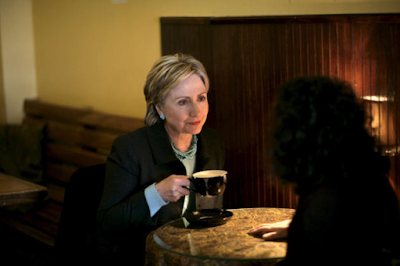 Hillary Clinton during the 2008 presidential campaign. Photo by Brooks Kraft.
Irving Habermanâ€™s campaign silhouette from 1968 shows the unmistakable shadow of Richard Nixon.
â€œItâ€™s a prime example of a great campaign photograph,â€ Sidney said. â€œItâ€™s dramatic, it carries a lot of weight; itâ€™s kind of heroic.â€
Most photographers captured Hillary Clinton emoting, with her mouth open, during the 2008 presidential race. Brooks Kraft took the opposite approach, shooting her listening to a constituent as she held a cup of coffee.
â€œHe was the White House photographer for Time magazine for 10 years,â€ Sidney said. 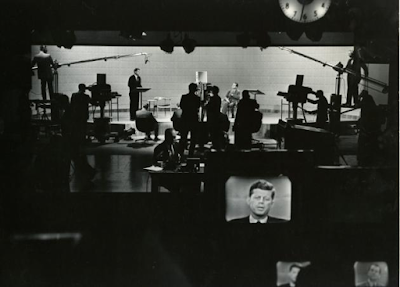 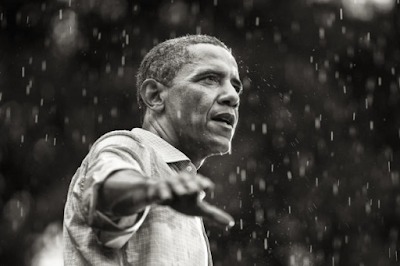 President Barack Obama speaks in the rain during a campaign rally in Glen Allen, Virginia, 2012. By Brooks Kraft.
In 1960 Haberman captured the Nixon-Kennedy first-ever TV debate from both the stage and its monitors.
â€œHe was working for CBS as a photographer, so he had intimate access,â€ Sidney said. â€œIt was the first time when candidates had to look good on TV. Everybody says the way Nixon looked is what sank him. Thereâ€™s a lot packed into that picture.â€ 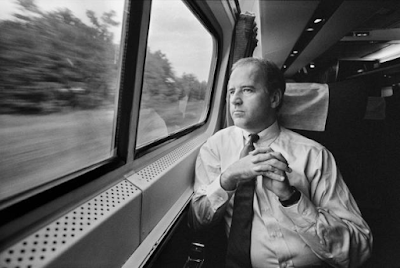 Joe Biden commuting on a train in 1988. By Joe McNally.
A trio of Eppridgeâ€™s Life magazine photographs capture both the excitement and the danger of Robert Kennedyâ€™s 1968 presidential bid. The images include the famous â€œFearsome Foursomeâ€ Los Angeles Rams football players who served as his bodyguards. His passionate supporters ranged from people of color to women and immigrants. Eppridge said it was hard not to be inspired and retain his journalistic neutrality.
â€œIt was after (Kennedyâ€™s) brotherâ€™s assassination, which was an open wound,â€ Michelle said, â€œand the sense of hopelessness that the Vietnam War would go on forever.â€
Eppridge said as the crowds swelled into pandemonium on a daily basis, even the press were in fear for the candidateâ€™s life.
Eppridge would go on to take the famous photograph of a dying RFK at the Los Angeles Ambassador Hotel.
If you go
WHAT: â€œThe Campaignâ€
WHEN: 10 a.m.-3 p.m. Sunday-Thursday; 10 a.m.-4 p.m. Friday-Saturday
WHERE: Monroe Gallery  (Face masks required; limited to 10 visitors at a time)
HOW MUCH: Free to attend. Information at 505-982-0200, monroegallery.com