ON THE TOWN EXHIBITION REVIEW 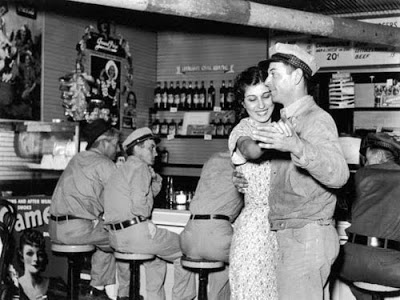 â€œOn the Townâ€ at Monroe Gallery is a survey of more than 50 classic black-and-white photographs of people out to celebrate and have a good time. The press release explains that the phrase â€œon the townâ€ is probably derived from the old English saying â€œgoing to townâ€: â€œto arrive or make one's mark where significant things are happening.â€ The American adaptation â€œon the townâ€ came to mean â€œin spirited pursuit of the entertainment offered by a town or city,â€ probably dating from the 19th century when going to town for an outing was a big day for country folk.

â€œOut on the townâ€ can also refer to photojournalism, a type of nonstudio social-based photographic practice. The images in this exhibition were commissioned by the Farm Security Administration, the motion picture industry, or journals such as Life, Look and Time magazines from the 1930s through the 1960s. Alfred Eisenstaedt (the father of photojournalism) and Carl Mydans were staff photographers for Life.

â€œOn The Townâ€ is nicely installed. Based on subject or visual correspondences (rather than photographer), the images loosely flow one into one another through various subthemes or categories like â€œdancing,â€ â€œdrinking,â€ â€œeating,â€ and â€œnight lights,â€ picturing social rituals and people (across class and race) in different geographic locations, having fun in public places like bars, clubs, restaurants, cafes, drive-ins, community centers and amusement parks.

We see professional dancers like Gene Kelly, the chorus lines of Las Vegas show girls, go-go dancers on â€œHullaballoo,â€ and regular folks of all ages just â€œletting goâ€ and moving to the beat. Steve Schapiro's â€œAmateur Hour, The Apollo Theater,â€ showing moms and kids dancing up a storm; Cornell Capa's â€œThe Lindy Hop, The Savoy,â€ depicting an African-American man and woman dancing in front of what appears to be an all-white audience sitting on the floor; and â€œTeenagers at a Partyâ€ drinking Coke and slow dancing by Nina Leen (one of the first women photographers for Life), are examples of the latter. 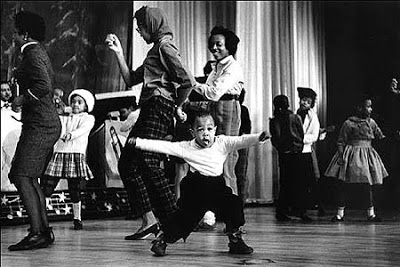 Before he emigrated to the United States in 1935, Eisenstaedt, the most published photojournalist in the world, photo-documented the rich and elite of Europe. Classic images from this period â€” â€œPremiere at La Scala,â€ â€œIce Skating Waiter,â€ â€œWaiters Watching Sonya Henie Skateâ€ and â€œSwimming Pool in CafÃ© in Paris Hotelâ€ â€” are included in the exhibition. Bob Gomel's document of American privilege, â€œTailgating, Yale Football,â€ pictures a chauffeur doubling as bartender pouring drinks from the back of a Lincoln Continental for rather stiff alumni queued in their suits.

I love checking out the rich and famous who always seem to be â€œout on the townâ€ â€” Sophia Loren, Jayne Mansfield, Barbra Streisand, Mia Farrow, Frank Sinatra, Nat King Cole, Jackie Gleason, Marilyn Monroe, David Bowie, Andy Warhol and Edie Sedgwick â€” but my favorite photographs in the exhibition are not of glamorous people or places.

Gomel's photograph of the rowdy crowd at â€œThe Red Onionâ€ in Aspen; Guy Gillette's image of a father and two sons sitting at the counter in â€œArnold's CafÃ©, Lovelady, Texasâ€; and Carl Mydans' â€œThe Loungers Hang Around the Duval Clubâ€ and â€œDancing at Rosie's CafÃ©,â€ both photographed in Freer, Texas, are just a few that capture simple pleasures.

Documentary photographs can suggest narratives. Verner Reed's â€œBrunswick Hotel, Boston, Massachusettsâ€ (1957) depicts four elderly women dressed in their best for afternoon tea with the priest. In contrast to the formal white tablecloth and musicians, the hotel walls are peeling and full of holes â€” a doorway opens onto a pile of rubble. One wants to read the image within histories of photography documenting cities bombed during World War II, except it's Boston and one can see the city beyond the rubble. Apparently, the Brunswick had a large number of residents, retired actors and actresses, who spent their time in elaborate dress, having tea, and later drinks, in the once ornate, now dilapidated hotel lobby about to be torn down â€” one last tea before the hotel and way of life would be demolished, a scene reminiscent of the musicians in the film â€œTitanicâ€ who kept playing as the ship went down. 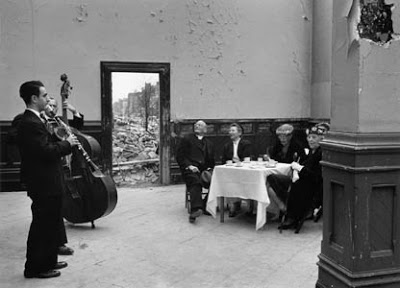 Ernst Haas' â€œDream Ball, New Yorkâ€ (1952) is equally intriguing. Given the secrecy and paranoia that forced gays out â€œon the townâ€ into private clubs and parties during the McCarthy era, it's not surprising that there is only one non-heterosexual image in this otherwise hetero-survey. Interestingly, this image is interpretive â€” fuzzier than the sharp documentary crispness of most of the other images. A suited man with two drinks in his hand walks in on what appears to be two men dancing together cheek-to-cheek in the smoke-like blurred distance (no surroundings are discernible).

These photographs (most are gelatin silver prints and a standard documentary 16-by-20-inch size) are documentation of an era, conveying a certain sense of nostalgia that comes from the medium â€” â€œfilmâ€ versus digital photography â€” as much as the subjects of each photograph. â€œOn the Townâ€ is a delightful exhibit, up for one more week. I guarantee it will uplift your spirit.