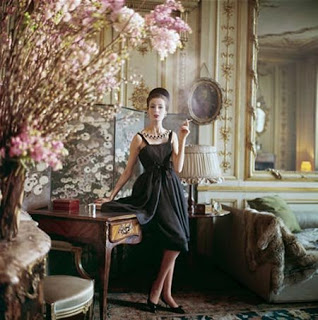 A Dior gown photographed for LIFE in 1960 in the 17th century home of Suzanne Luling, then directrice of Dior.

Santa Fe - Monroe Gallery of Photography, 112 Don Gaspar, is pleased to announce a major retrospective exhibition of photographs by Mark Shaw, concurrent with the publication of the new book "Charmed By Audrey". The exhibition opens with a reception with the photographer's son, David Shaw, on Friday, April 24, from 5 to 7 PM. "Mark Shaw: A Retrospective" will continue through June 28.

Also leading fashion photographer, Mark Shaw worked for Harper's Bazaar, Mademoiselle, and a host of other fashion magazines. He started working for LIFE magazine in 1952 and in 16 years shot 27 covers and almost 100 stories. Throughout the 1950's and 1960s' Mark Shaw shot the European fashion collections for LIFE, and was one of the first photographers to shoot fashion on the runways and "backstage" at the couture shows. He covered Audrey Hepburn extensively for LIFE during the making "of Sabrina". His photographs of Audrey Hepburn had been lost after Mark Shaw's death, and were only found in 2005. Featured in the exhibition are photographs from every facet of Mark Shaw's remarkable and distinguished career.