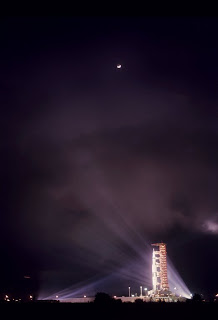 Apollo 11 flew 3 astronauts a total of 953,700.41 miles (appx.), and put Neil and Buzz on the Moon, and brought them back . This event was a sort of upbeat finale to the end of the 60's - Charles Manson, Woodstock, and the Lt. Calley murder charges and Altamont all happened later in the year.

Follow this blog and our Twitter page for more information this summer. And visit our exhibition from last year, "It Was Forty Years Ago Today: Photographs From 1968".
‹ PREVIOUS   |   NEXT ›