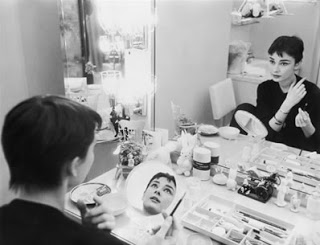 Audrey Hepburn, her head caved into a sink on the set of “Sabrina,” giggling, her hair soft peaks of shampoo. Coco Chanel, sprawled languidly across a couch, a cigarette dangling from tight lips, still in her pumps. Jackie Kennedy swinging curly haired Caroline over the Hyannis Port surf.
Mark Shaw's name lacks the instant recognition of other stars in the pantheon of great photojournalists — Capa, Eisenstaedt, Burke-White. That oversight is due largely to his work being buried for nearly 50 years. The release of “Charmed by Audrey,” (2008, Insight Editions, $18.95) concurrently with a retrospective at the Monroe Gallery of Photography, aims to lift the veil.

Perhaps best known for his candid shots of John and Jacqueline Kennedy and their children, Shaw started as a commercial and fashion photographer before graduating to celebrities and Camelot in the 1950s and '60s.

Shaw met Hepburn on the set of the classic film “Sabrina” during a two-week assignment for LIFE in 1953. His son David and daughter-in-law Juliet Cuming had no idea the photographs existed.

David Shaw was 8 years old when his father died at 47. His memories are sketchy at best, Cuming explained. The couple learned of the photographs' existence when Shaw's second wife, Geri Trotta, died in 2005. She had stashed the black and white treasures — 60 rolls of film — buried beneath papers and photographs in the bottom of a box in her house.

“Audrey was a bit of a workaholic,” said Cuming, who also serves as the collection's archive director, “and she recognized Mark as a workaholic. So she respected him.
“These are very relaxed, candid photos,” she continued. “He was with her for two weeks. He took thousands of shots. Of course, Audrey looks beautiful in every frame. She looks great at 4:30 in the morning being driven to the set.”

Because neither Shaw nor Hepburn are alive to tell the tale, Cuming pieced together reminiscences from a 1955 book called “How LIFE Gets the Story: Behind the Scenes in Photojournalism.”

Shaw apparently called Hepburn “The Monster” because of her rigid devotion to her work. She was shy at first, trying to evade his lens. But when she realized he was as devoted to photography as she was to acting, she dropped her guard. The series of the actress talking on the phone were taken when her agent called her at home. By the end of the shoot, the stylish young ingénue was treating Shaw like a member of the family.

The only son of a Lower East Side seamstress and an unskilled laborer, no one is sure how Shaw grew interested in photography. An engineering student at Pratt Institute, he became a highly decorated World War II pilot. After the war, he freelanced for LIFE magazine, becoming one of America's top fashion and celebrity photographers and a close confidant of President John F. Kennedy. A charming, erudite character who could fly himself to assignments, he was soon living the glamorous life.

“Mark's whole M.O. was to be as unobtrusive as possible,” Cuming said. “He shot with a very small camera. He did not have a lot of lights and equipment that would intimidate people. He didn't have an entourage of 18 assistants. He was a small man: about 5-foot-6. And he called his photos 'snapshots.' ”

Those “snapshots” included intimate images of the Kennedys at play and relaxation. Shaw met Jackie Kennedy during an early photo shoot of senatorial candidates' wives. They struck up a friendship.

Shaw had covered the couture runways in Paris.

“For Americans in the '50s, that was very glamorous,” gallery co-owner Michelle Monroe said. “He knew Grace Kelly. He was used by LIFE because he had access to all these people.” Shaw's A-list of subjects also included Cary Grant, Jackie Gleason, William Holden and Danny Kaye.

“It didn't hurt that he was very handsome,” Monroe added.

Jacqueline Kennedy was impressed that Shaw used a wide-angle lens, which rendered his pictures almost impressionistic, with a soft-focus patina. The technique looked both casual and artistic at the same time. Shaw was the photographer who took the famous 1959 photograph of Kennedy walking through the dunes, said to be the late president's favorite portrait. Historians credit him with being one of the few photographers to forge the visual myth of Camelot.

“Jack had to be away for Jackie to allow a photographer in the White House,” Monroe said. “She hated using the children as publicity.” “They always look so relaxed and beautiful,” Cuming said. “That was Mark's gift. We have correspondence between Jackie and Mark about Mark being about to become a dad,” she continued. “They were friends.” Afterward, Shaw was a regular White House visitor, taking family photographs forbidden to other photojournalists. He even helped Kennedy sort through satellite photos taken during the Cuban Missile Crisis, Cuming said.

Cuming and her husband didn't know the vast cache existed until the 1994 death of Jacqueline Kennedy; when people began calling them in search of “never before seen” Kennedy pictures. “Little by little, we realized there's a collection here and it's turning into dust,” Cuming continued. “We had no idea what we were getting ourselves into,” she continued. “For 10 years, we didn't make any money.” The couple built an archives in Vermont. Cuming still has no idea how many images it contains — “hundreds of thousands,” she guessed. Mark Shaw died of an amphetamine overdose administered by the Kennedy family doctor, who later lost his license after being implicated in Shaw's death, Cuming said. “It's one of those things everybody talks about but no one knows exactly what happened,” Cuming said. He died alone at his apartment. He was charming to people he needed to be charming to. He was also very strong-willed in other areas. “He actually died completely broke. His material possessions were all sold to pay his debts.”