Palace of the Governors Photo Archives Wins Award for Excellence

New MexicoAssociation of Museums to present the honor on Nov. 4 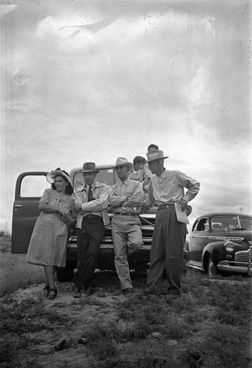 Santa Fe—Citing its many resources and online accessibility, the New Mexico Association of Museums will bestow its Edgar L. Hewett Award for Excellence on the Palace of the Governors Photo Archives at its annual business meeting in Farmington on Friday, Nov. 4.

“The staff of the Photo Archives has worked diligently to make the state’s visual record readily available to people in any part of the state and even the world,” said Dr. Frances Levine, director of the New Mexico History Museum/Palace of the Governors. “These resources will prove especially valuable as we prepare to enter our Centennial year as a state. We’re honored by this award.”

The History Museum as a whole received the Hewett Award in 2009, the year it opened on a campus that includes the Palace of the Governors, Photo Archives, Fray Angélico Chávez History Library, Palace Press, and Native American Artisans Program. The award is named for the first director of the Museum of New Mexico, Edgar Lee Hewett, who led the agency from 1909 until his death in 1946. He also taught anthropology at the University of New Mexico and was instrumental in encouraging the development of small museums throughout the state.

“The Palace of the Governors Photo Archives is a rich and tenured resource in our state that promotes preservation and scholarship through a unique collection of historic photographs, films, glass plate negatives, photo postcards, and other visual imagery,” said Laurie Rufe, president of NMAM and director of the Roswell Museum and Art Center. “Recipients of this award illustrate exemplary leadership in the field, and the Palace of the Governors Photo Archives, with its multitude of resources and online presence, serves a community of scholars, authors, researchers, and the general public on an international level.”

The archives hold an estimated 800,000 items dating from 1843 to 2011. Included among them are historic photographic prints, cased photographs, glass plate negatives, film negatives, stereographs, photo postcards, panoramas, color transparencies, lantern slides, and more than 1,500 books on photography. More than 16,000 images have been digitized and can be keyword-searched by clicking here. Other images can be searched in person. Nearly all are available as high-quality digital scans and prints, for editorial reproduction, and use in advertising, publishing, media projects, and TV news media stories at nominal cost.

Research into what the archives already hold is ongoing. Just last year, Archivist Daniel Kosharek discovered a rare, ca. 1870s photograph of famed Navajo war chief Manuelito. The image, now on display in the History Museum, was among photographs, glass-plate negatives and other photographic ephemera in the archives’ Henry T. Hiester/Melander Brothers Collection. Most recently, staff and volunteers have been processing and digitizing 5,000 early 20th-century images of Santa Fe and northern New Mexico taken by Jesse Nusbaum.

Some of the most important 19th- and 20th-century photographers of the West are represented in the Photo Archives’ collections, and the subject matter spans the history and people of New Mexico, anthropology, archaeology, and ethnology of Hispanic and Native American cultures. Smaller collections document Europe, Latin America, the Far East, Oceana, and the Middle East.

The archives are widely used by researchers, authors, publications and the public. More than 1,000 people visit the archives each year to conduct research, and several thousand more submit direct research queries, photograph orders, and permission requests each year from the website.