PAUL McCARTNEY TO RECEIVE KENNEDY CENTER HONORS; RECOLLECTIONS OF THE 1964 CONCERT IN DC 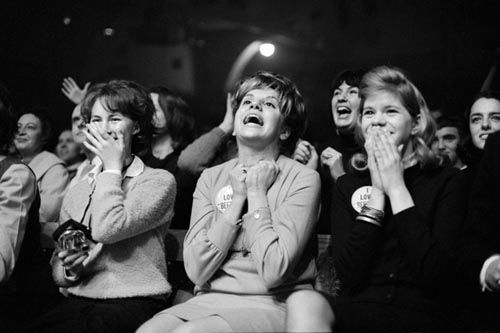 
On Feb. 11, 1964, Beatlemania blasted Washington - all shrieks and Arthur haircuts and songs that nobody could quite make out.

Two nights after a hysteria-inducing appearance on "The Ed Sullivan Show," the Beatles played their first U.S. concert at the Washington Coliseum, just north of Union Station.

With "I Want to Hold Your Hand" sitting atop the American Billboard chart, 8,092 people witnessed a dozen songs performed by the band that changed everything.

Bruce Spizer, author of seven Beatles books, says the concert at the long-defunct Coliseum (now a covered parking garage) "was one of the most exciting live performances the Beatles ever gave." Apple's iTunes is streaming the concert free of charge.

With Paul McCartney returning to Washington this weekend to receive the Kennedy Center Honors, here's the tale of the 1964 visit, as told by some of the people who lived it - including Sir Paul, who spoke to us last week from London.

John B. Lynn, son of Harry Lynn, who owned the Coliseum: My father got the call asking if he'd be interested in having the Beatles. He, of course, had never heard of them. But he said yes. He brought home a box of Beatles albums and singles to give out, and my brother and I became the most popular people in school.

Paul McCartney: We'd seen a lot of British stars come back from America with their tails between their legs. We made a promise to ourselves to not go until we had a No. 1. We were so excited to be madly popular in America, which was to us the Holy Grail because every shred of music we ever loved came from there. It was euphoric, and now we were heading to Washington on the train, which was very glamorous. And to cap it off, there was that beautiful snow.

Bill Eppridge, former contract photographer for Life magazine: We were going to fly down from New York, but a big snowstorm hit Washington. The Beatles reserved a couple of cars on the train and got tickets for the press traveling with them. I couldn't have had a better time. We all liked them. They were always looking for something to do. They had a race up and down the car, and two of them went up and over the seats and two of them crawled in the baggage racks. And then they grabbed the waiters' uniforms and served drinks. 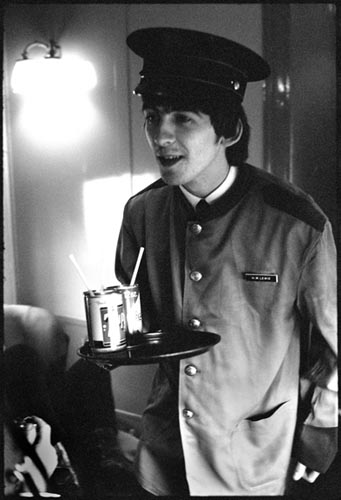 Bill Eppridge: George wearing Train Porter's Jacket. Train to D.C. Feb 10, 1964
Lynn: My father wasn't in the habit of meeting his acts when they arrived in town. But he met the Beatles. He didn't expect the crowd - especially on a snowy day.

McCartney: It was unbelievable, a great sort of validation of the whole thing. It was like: "Yeah, look! Everywhere we're going in America, it's happening!"

Tommy Roe, "Sheila" singer: In 1963, I was booked in England with Chris Montez, and the Beatles were a featured act on our tour. It was like Elvis Presley all over again. Brian Epstein, the Beatles' manager, had called my manager and put me on the Washington, D.C., show. I was really happy to do the show with them. We were all staying at the Shoreham Hotel, and I tried to hang out with the boys there, but it was pandemonium.


Al Gore, former vice president: The incredible phenomenon built on itself. The Ed Sullivan appearance just prior to their arrival in Washington was electrifying. We could scarcely believe the Beatles were coming to D.C

Reed Hundt, former Federal Communications Commission chairman: Everybody our age knew about them. How could you not? Gore and I were juniors at St. Albans. We weren't even 16 until the next month, and the Beatles were singing "she was just 17." We were thinking: Well, that's too old for us.


Ron Oberman, former Washington Star music columnist: They had a press conference at the Coliseum before the show, with all four Beatles in a boxing ring that became the stage. I asked George if he had a girlfriend. He said: "Yes, you love." I was doing one of the first regular columns on rock in a newspaper, and I was only 20, 21. The older people at the press conference didn't get it.

Roe: The concert was a big deal. It was an amazing scene. They were really catching on and everybody came to that show, either hanging out backstage and trying to become the fifth Beatle or trying to get on the bill. They kept adding people. Originally, it was just the Chiffons and me. But the Righteous Brothers [and the Caravelles and Jay and the Americans] were also there.

Lynn: My father had run one ad in the paper, and the concert sold out. They made a film and played it three months later at the Coliseum, like a closed-circuit TV broadcast, and they sold that out, too. He was so stunned that a group he'd never heard of before sold out. It was such an unusual event, and it was a windfall. He took the profit and used it to buy my mother a new Lincoln Continental convertible for her birthday. We came home from school, and he said, "The Beatles concert bought that for your mother."

Larry Sealfon, former record store clerk: I was working at Super Music in Silver Spring, and we were allocated a block of tickets to sell. But there wasn't a frenzy or anything like that. It was pretty orderly. After the concert, people came in - mostly mothers - complaining about their seats. They complained that all they got to see was the back of the Beatles.

Marsha Albert, whose request famously convinced WWDC-FM DJ Carroll James to begin playing the Beatles in 1963: The stage was in the middle of the arena and the band had to rotate around the stage. So they were only facing you a quarter of the time. The rest of the time, you were either looking at their backs or their sides. That wasn't ideal.

McCartney: That was the first time we'd ever played in the round. We said: "Do we have to do it?" "Yeah. We've sold tickets everywhere. You'll have to turn around." "How the hell are we doing to do that?" "Well, just do a few numbers east then shuffle around north. Then do a few numbers north and shuffle around west." We said: "What's Ringo going to do?" He had to shuffle the kit around himself. The idea that we had our backs and sides to three-fourths of the audience at any point of the show was awkward. We were used to getting them and holding them - paying attention to them and having them pay attention to us. I don't think I've done the in-the-round thing ever since.


Hundt: It was mostly girls. Being from a boys school, we had never seen so many girls in one place before. I don't know that I knew for sure that there were that many girls in the world.

McCartney: It was terrific. We'd been used to it in smaller doses. But in our minds, it's only right that it should get bigger. And where better for it than America, where everything is bigger? It was very exciting, just having that many people - predominantly girls, all screaming.

Albert: The concert started with some warm-up groups, and I was relieved because I had heard about the screaming that went on in England. And I thought: "Nobody's screaming. This is going to be nice; we're going to be able to hear them." (Laughs.) When they started playing, you couldn't hear a thing. It was unbelievably loud, like white noise. I remember the policeman near me stuck bullets in his ears.

Eppridge: That's probably where I lost most of my hearing. Either there or with the Marines in Vietnam, AR-15s cracking next to my ear. I remember my ears hurting from the high-pitched screaming for the Beatles. It was absolutely piercing. If you're around six railroad train engines and they're all traveling at 100 miles an hour and they slam on their brakes at the same time - that's what it sounded like. But it was delightful.

Gore: The acoustics in the arena combined with the absolute frenzy of enthusiasm made it virtually impossible to understand a single word that they sang. You had listen carefully to get the general flow of the song, and of course, everybody knew all the words prior to the concert. We all loved their music, but clearly there were a lot of people in that crowd who loved it even more than I did because they couldn't stop screaming. I'm thrilled that iTunes now has the film of that concert, because I'll get to hear the words clearly for the first time.

Oberman: It was a short set, like 35 minutes. I was able to hear some of the songs with some difficulty. I thought they were excellent.

McCartney: I don't remember thinking we played particularly well. But looking back, time has been very kind to us. It was a cool gig.

Lynn: This is kind of gross, but somebody said - and maybe it was my father - that after the concert was over and everybody had left, you know what the smell was in the Coliseum? It was pee from all these girls who got overexcited. 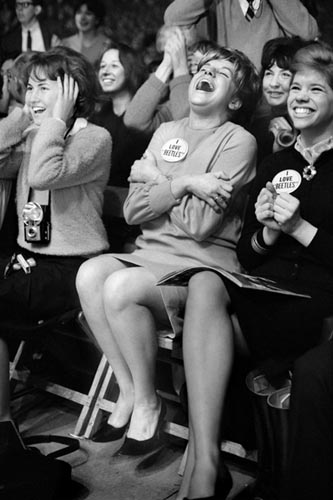 Bill Eppridge: ï»¿Beatles Concert, Washington Coliseum. Feb 11, 1964
Roe: This was early in the crazy rock-and-roll thing, so nobody really rushed the stage. They were rowdy and very loud, but they stayed in their seats. They hadn't realized you can go berserk at these shows. It was like polite pandemonium.

Albert: There was a large police presence there, but since everybody was so well-behaved, they didn't have much to do except stand around. But people were throwing stuff. Since we were down front, we were getting pelted with flashbulbs the size of golf balls and also jelly beans.

McCartney: We had been asked somewhere what is your favorite sweet, and we said jelly babies. So the fans took to throwing them onstage, and this had reached Washington. In England, they're soft and always in the shape of babies. What do you call them? Jelly beans. They're hard. They stung, and we're playing in the round, and they're being thrown from everywhere. It was very unsettling.

Albert: The show was somewhat disappointing. I mean, it was exciting in one way. Yeah, I got to see them. But there was all this interference - the noise, and all the stuff raining on us.

Roe: After the show was over, I drove back to the Shoreham and went to the Beatles' room, and we had a beer or two and just chatted. But it was hectic. Everybody was trying to do interviews with them. I helped Murray the K get in there and tape an interview with them.

McCartney: I'm sure we got pissed off by not being able to just enjoy ourselves and always having to answer some dumb question about this that and the other - like what toothpaste we were using. We saw ourselves as sophisticated dudes in those days and there was a little bit of irritation at the undue attention we were getting. But at the same time, we asked for it. . . . But the great thing about memories is that the good bits are the ones that tend to remain. The trip to Washington is a very romantic time in my memory. 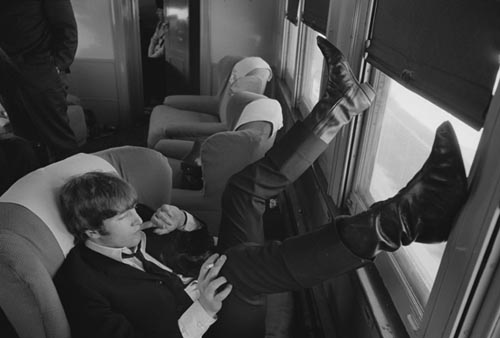