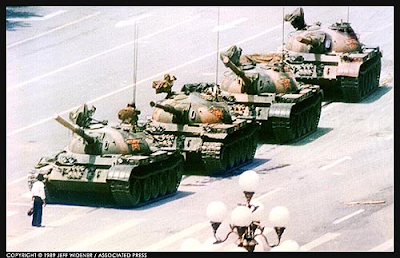 "23 years after Tiananmen, China is still paying: The annual crackdown on commemorations of the June 4 anniversary of the brutal suppression of student-led demonstrations based in Tiananmen Square in 1989 Beijing is under way."

reminds us that the right to freedom of expression also requires consistent defense.

Monroe Gallery of Photography, 112 Don Gaspar, is pleased to announce "People Get Ready: The Struggle For Human Rights", a major exhibition of  dramatic photographs from significant human rights struggles in history. The exhibition opens with a public reception Friday, July 6, 5 - 7 PM, and continues through September 23, 2012

The belief that everyone, by virtue of her or his humanity, is entitled to certain human rights is fairly new. Its roots, however, lie in earlier traditions and documents of many cultures; however, it took the catalyst of World War II to propel human rights onto the global stage and into the global conscience.

Yet, every day we still see images of people struggling for their freedom; their right to live without fear, their right to speak and their right to worship the god of their choice. In the past several months, we have watched as citizens in Egypt and Libya took to the streets to air their politics and struggle for freedom; and here in the United States, the Occupy Wall Street movement championed the cause of economic and social rights. The struggle around the world is unrelenting. Dedicated photojournalists have been, and continue to be, there to bring the voices and the images of the people as they rise to fight for basic human rights. (According to the Committee To Protect Journalists, 19 journalists have been killed in 2012 and 179 are currently in jail world-wide.)

Photographers in this exhibition illustrate the power of photography to inform, persuade, enlighten and enrich the viewer's life. Many of the photographs featured in this exhibition not only moved the public at the time of their publication, and continue to have an impact today, but set social and political changes in motion, transforming the way we live and think.

Many global human rights movements are documented in the exhibition, including: Civil Rights in America, Women's Rights, Democracy rights, People's rights, Worker's rights, Gay rights, and other causes. Also included are stark photographs of stalwart defenders of the-then status quo, from segregationists to proponents of sexism.