Photo exhibit captures soldiers unaware of their fate in Philippines

By Chris Quintana
Via The Santa Fe New Mexican 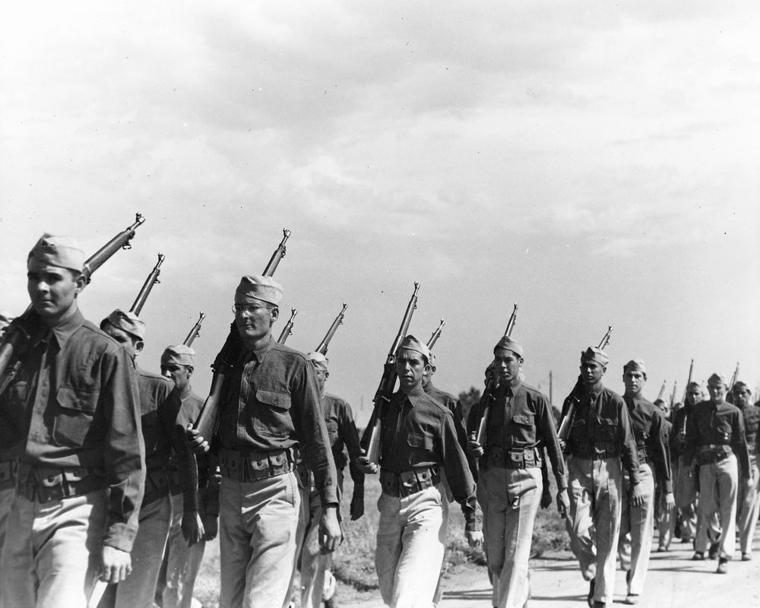 In August 1940, members of the 200th Coast Artillery Regiment gathered to train at Camp Luna near Las Vegas, N.M., before deployment to the Bataan Peninsula. Many never returned. Courtesy New Mexico Magazine Collection/Palace of the Governors Photo Archives Negative No. HP200720332


The young men photographed during military drills or waiting in line for food at Camp Luna near Las Vegas, N.M., had no idea that hundreds of them would die defending the Bataan Peninsula, walking in the Bataan Death March or during imprisonment by the Japanese under brutal conditions.


In August 1940, members of the 200th Coast Artillery Regiment, which included more than 1,800 New Mexicans, had gathered to train for the last time on home soil. A year later, their units were deployed to the Philippines. The 10 black-and-white images in a new photo exhibit at the Jean Cocteau Cinema capture the soldiers’ blissful ignorance.

“They’re human beings, not just cogs in the machine,” said Daniel Kosharek, the photo curator for the Palace of the Governors.

Kosharek said he has wanted to display these photos for a while to honor and recognize the young men, but until now he didn’t have the chance.

The exhibit will be on display at the Jean Cocteau until Oct. 12 in the cinema’s gallery at 418 Montezuma Ave. It will be open to the public from 1 to 8 p.m. daily. The images by an unnamed photographer are from the New Mexico Magazine Collection at the Palace of the Governors Photo Archives.

Kosharek said the photos were part of a series that published in a 1940 edition of New Mexico Magazine.

Many of the 1,816 New Mexicans in the regiment were fluent in Spanish, which led military officials to deploy them to the Philippines before the war to aid Filipino troops in defending the Bataan Peninsula.

According to a news release, by the end of the war, 829 New Mexicans from the regiment were dead or missing. More than 800 died during the march or during their imprisonment. A third of the survivors perished within the year due to injuries or illness. Two survivors still live in Santa Fe: Richard Dalyand John Moseley.

But the photos in the exhibit show none of the horrors awaiting the young men. Instead, the men are photographed slogging through the monotony of military training at the rural, dusty Camp Luna.

One photo depicts a line of soldiers clad in wide-brimmed hats marching along what appears to be a dusty road. Rifles are slung over their shoulders, but the firearms look more like props than weapons. Another image depicts the soldiers-in-training firing heavy artillery. A plume of dark gray smoke wafts from one of the cannons, a harbinger of what awaits the men overseas.

One of the photos depicts several tall young men waiting in line at the mess hall. They carry what appear to be tin pans and ceramic plates. Dressed in civilian attire, they leer at the photographer with a combination of something between curiosity and annoyance. One wears an Albuquerque High School T-shirt adorned with the school’s mascot, a growling bulldog. The photos are specked with dust, but there’s no denying the innocence in the young men’s faces.

As part of the exhibit, the Jean Cocteau will screen the 2005 film The Great Raid at 1:30 p.m. Saturday. The film was based on William Breuer’s The Great Raid on Cabanatuan and Hampton Sides’ Ghost Soldiers, both accounts of the rescue mission to save Bataan prisoners of war. Tickets are $7.

If you go
What: Photo exhibit titled Before Bataan: New Mexico’s 200th Coast Artillery
When: 1 to 8 p.m. through Oct. 12
Where: Jean Cocteau Cinema, 418 Montezuma Ave.
On the Web
• For more information about the photo exhibit, visit nmhistorymuseum.org or jeancocteaucinema.com.