The installation of the Joe McNally exhibit has started. First to arrive, the Giant Polaroids. 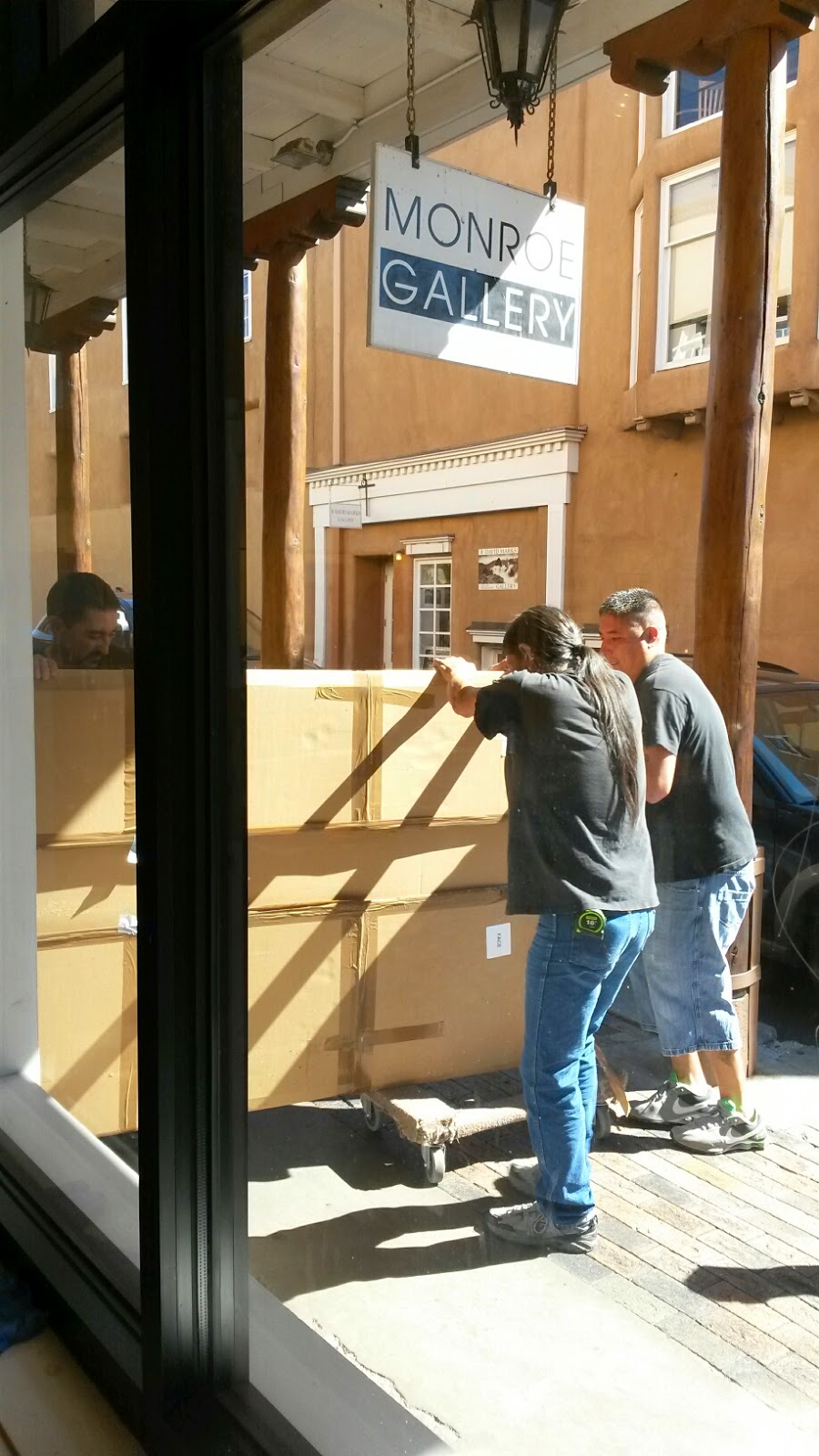 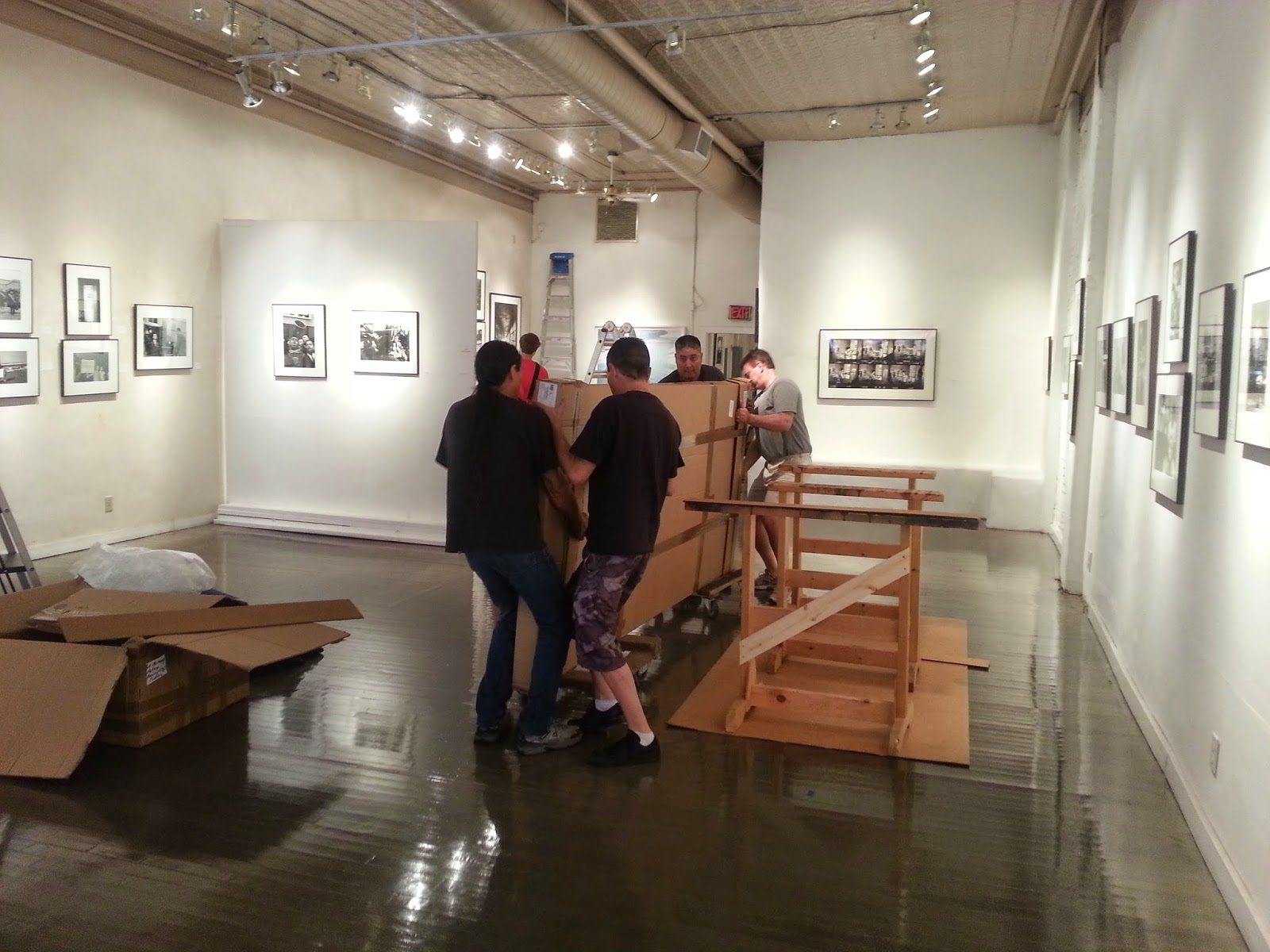 Joe McNally tells a bit about the history of these magnificent photographs,  via his blog:


In 2000, I was assigned to shoot pictures for a very small story (which was never published) on a unique photographic instrument called Moby C, which at the time lived on the lower East Side of NY. Moby after the whale, not the musician.  This camera is the world’s only Giant Polaroid camera, invented at the behest of Dr. Land himself. It is the size of a one car garage. Its lens came from a U2 spy plane, according to legend. At f/45, you have about an inch of depth of field. You cannot focus the lens–you have to focus your subject by moving them back and forth in tiny increments.

There is no shutter, you have to work camera obscura at the moment of exposure. I used about 25,000 watt seconds of strobe, mostly run through a 12×12 silk. The strobe system was wired to a Mamiya RZ 6×7 camera, bore sighted under the Polaroid lens. We would pose the subject, then wait for the interior workings of the Polaroid to spool up (there are two technicians inside the camera when you shoot, and they have to prepare things, like switch on a Black and Decker wet dry vac to suck the Polaroid film to the giant backplate of the camera). Then I would go dark in the studio, pull the cap of the Polaroid lens, fire the Mamiya and thus render an instantaneous dupe, one a huge positive, and the other a 6×7 transparency.

Huge indeed. What results after the exposure is a life sized image, 40″x 80″. You lay it out on the floor of the camera, wait 90 seconds (it’s the same Polaroid paper that comes in your over the counter cameras) and then peel the chemical backing off. There you have it.

I had convinced the elegant and easy going Jennifer Ringer, a principal with the NYC Ballet, to come and work with me during this first, experimental day with the camera. We made some nice, big pictures of her. (I was chuckling inside during this shoot, harking back to our old philosophy at LIFE magazine: “If ya can’t make ‘em good, make ‘em big and in color!”)

Made seven successful images that day, which is a lot of production for this behemoth of a camera, and found I had a bit of an affinity for working it. (Try anything once, right? Just have faith and remember the Lord looks after a fool.) 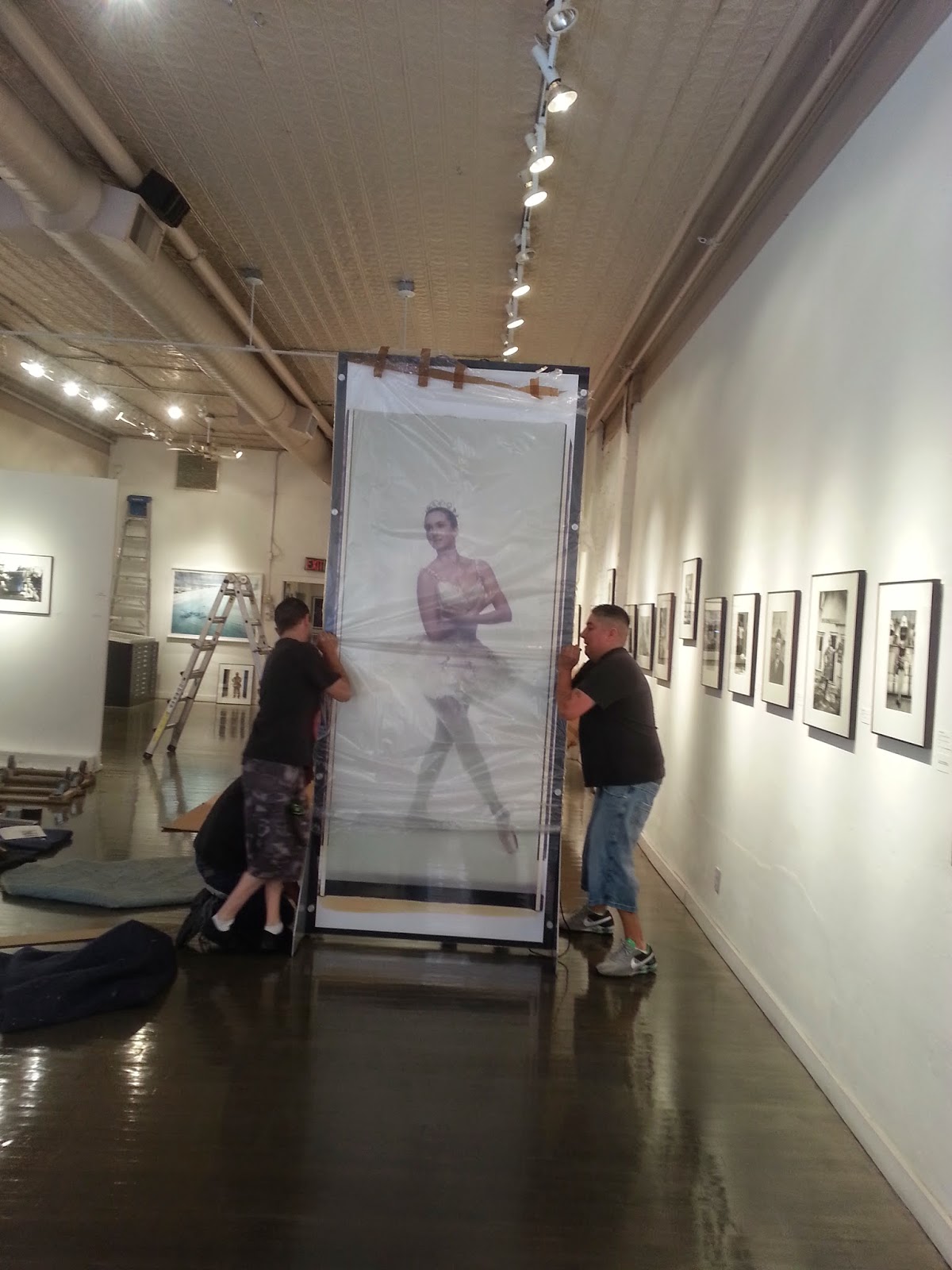 ﻿
Hmmm. Things stick with you, right? A week after 9/11, I sent an email to the only guy I knew who had a bunch of cash and would give me a quick decision; the editorial director of Time Warner, John Huey. John’s basically an old Southern newspaper man who kind of looks at you sideways, lets you babble, and then tells you what he thinks. He’s smart as a whip, quick off the mark, and does not suffer fools or photographers gladly.
I sent him the email on a Thursday night. He gave me money for the project Monday morning. The pressure was on. He was taking a huge gamble with his company’s dough, $100,000, to be direct about it. He looked me in the eye and drawled, “Joe, you spend $20,000 and get me no pitchahs, that’s okay. You spend $100,000 and get me no pitchahs, we got a problem.” He kind of drew out the word, “prrroblem.” I gulped and left his office.


My notion was that this camera was made for people of stature, a heroic instrument, if you will. You have to literally stand for your portrait. You collect yourself in the dark, holding still, waiting for the strobe explosion. And then you are done. One shot. (90% of our subjects we did in one exposure. Each sheet of Polaroid cost $300. I dreaded blinkers.)


It became a document known as Faces of Ground Zero. It toured through seven stops, opening at Grand Central Station, and coming back to NY a year later. For the anniversary show they threw a huge tent over where they usually put the Christmas tree in Rockefeller Center. It was seen by lots of people. The Polaroids and the resultant book(s) helped the sponsors, Time Warner and Morgan Stanley, to donate close to $2 million dollars to the relief of downtown public education. In the tent at the Rock Center show, we sold about $40,000 worth of books in 3 weeks. All of it went to the downtown PTA’s.

My good friend, Louie Cacchioli. Louie saved a lot of people that day by keeping his head and telling them to follow his light. Out on West St., running from the second collapse, he was overtaken by the cloud of ash and soot. Blinded by the smoke, he felt along the ground and stumbled onto a discarded oxygen mask. He clapped it to his face. He estimates he had about 30 seconds left.

Jan Demczur, a Polish window washer who scraped through 6 inches of sheet rock with his squeegee blade and thus saved the 4 people he was trapped in an elevator with. His squeegee is in the Smithsonian.

Joe Hodges. A veteran firefighter who could have easily retired after 9/11, but chose to stay on. “The older guys have to stick around and show the younger guys the way,” was how he put it.

So we kept working. Our last subject was Rudy Giuliani. He finally came on the last night. We were out of money, out of time. We shot 2 Polaroids of hizzoner, and closed the doors.

Things you don’t think about while you are in the throes of a project like this, are, what happens next? After ebeing xhibited in seven cities in 2002, seen by almost a million, I became the owner, lock, stock and metal framework, of about 10 tons of photography. (The framed pieces, which form the traveling core of the show, are 4′x9′ and weigh about 300 pounds.) They reside in museum quality, climate controlled storage in a warehouse in New Jersey.


Monroe Gallery of Photography is honored to include 6 Giant Polaroids in the forthcoming exhibit. The exhibit opens with a public reception for Joe McNally October 3, and continues through November 23. You can tune in to a special Google+ Hangout with Joe McNally and Sid and Michelle Monroe on Monday, September 29  10:30 Eastern time. Joe will tell some of the stories behind the photos featured in the visit. You'll get to see the gallery and get a feel for what goes into creating an exhibit like this one. Questions are welcome. To listen bookmark this link. (Also available live or for later viewing on YouTube here. 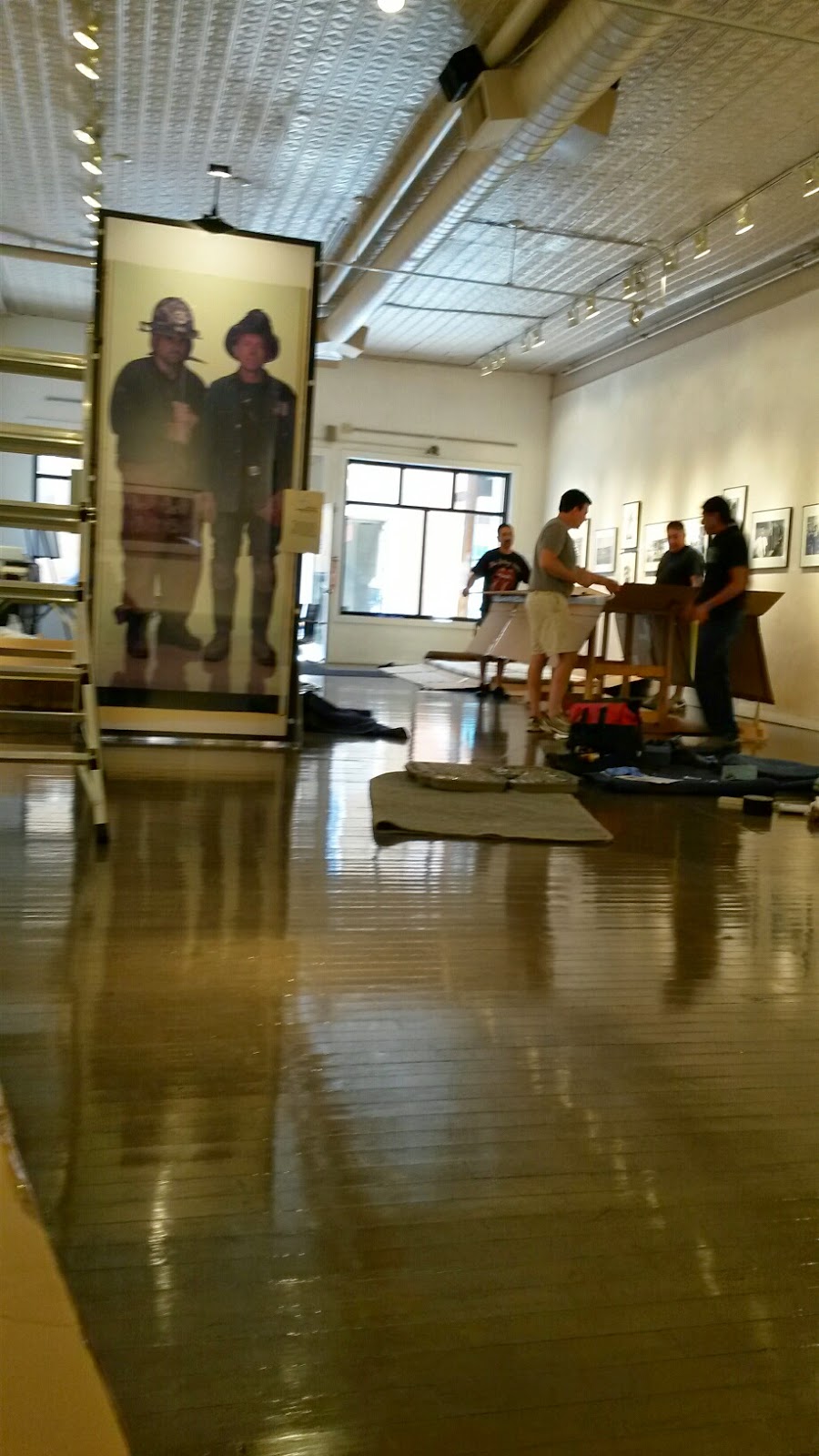 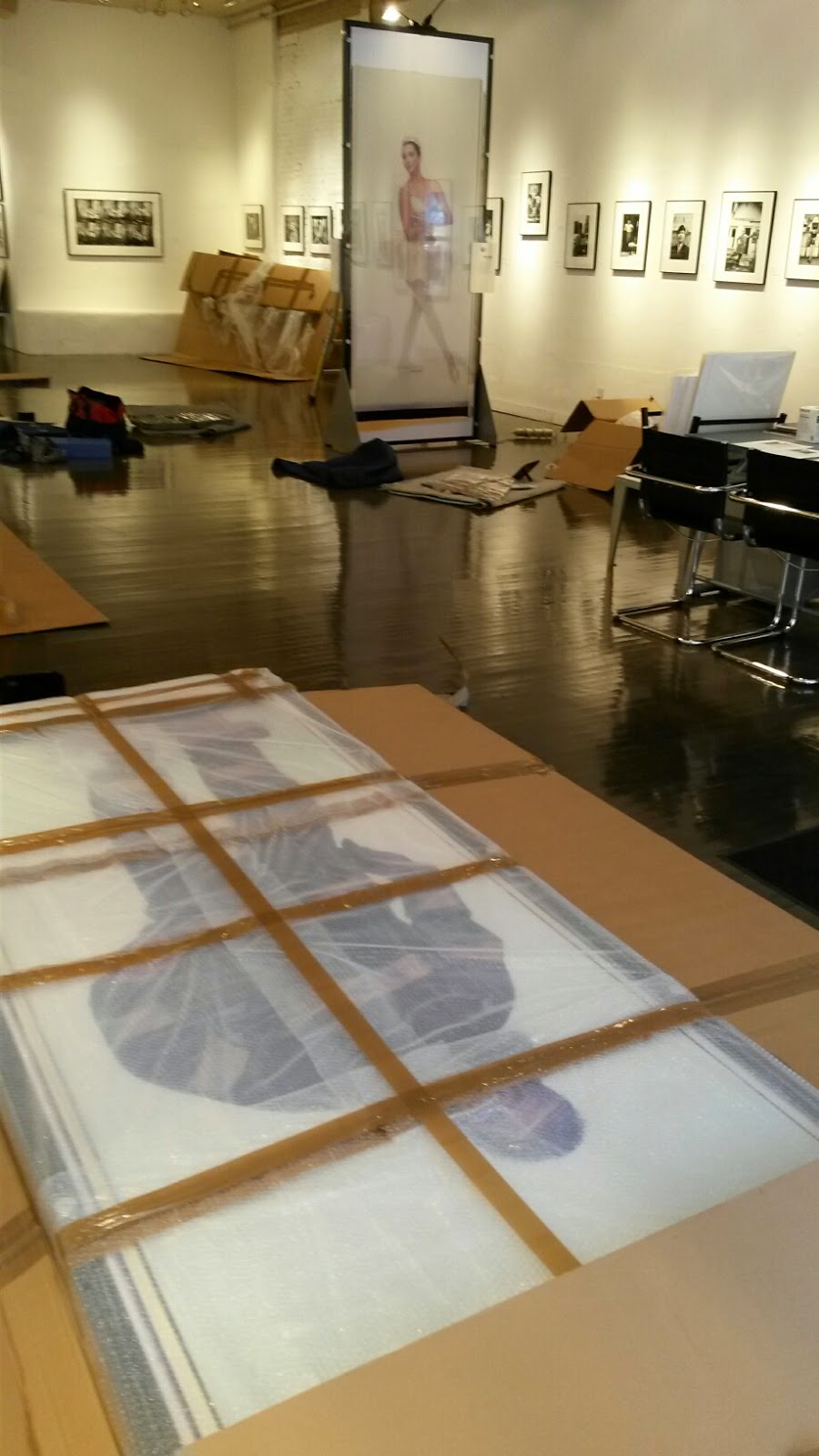