PHOTOGRAPHER JOE McNALLY ON VISIT TO "A THOUSAND WORDS: MASTERS OF PHOTOJOURNALISM" 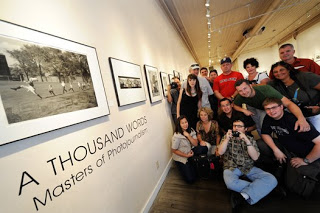 We were very proud to have the great photographer Joe McNally in Santa Fe last week, and thrilled when he brought his workshop in to see the exhibit "A Thousand Words: Masters of Photojournalism". In his early days Joe worked at Time Inc., and like us, was fortunate to know many of the legendary Life magazine photographers.

He posted very kindly on his Blog:

"So you know what saved the day? What elevated us all? A visit to Sid and Michelle. The Monroe Gallery of Photography currently has a show called “A Thousand Words.” Walking into those four walls adorned with those pictures is to leave all the other crap behind, and be lifted up by the most beautiful breeze you can imagine. The images cut to the chase and the heart. You get goose bumps. Your eyes sting. You remember why you picked up a camera in the first place.

Sid and Michelle are so knowledgeable, and for them, the pictures on the walls are family, just like the people who made them, though a fair number of those shooters are gone, which makes preserving their legacy all the more necessary. They told my class stories and a bit about their wonderful philosophy, which is, simply put, that pictures are important, and have value.

Bill Eppridge’s pictures from RFK’s campaign are on the wall, and Sid showed the class Bill’s book. In A Time It Was, Bill’s visual record of Bobby’s campaign, is the charred master print of the busboy cradling the senator’s head. It was damaged in the Laurel Canyon fires that swept through Bill’s home, but the core of the image is still there, and the charred edges make that moment all the more searing and painful to look at." 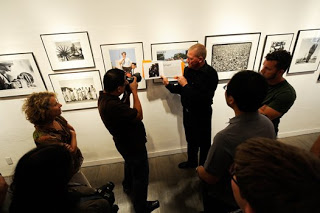 "The lead photo of the show is Eisie’s famous drum major shot. I used to bump into Eisie all the time as he padded the hallways of the 28th floor of Time Inc. “Hello McNally,” accompanied by a fairly dismissive wave of the hand was generally as far as the conversation got. As the story goes, Eisie was waiting at the elevator on 28 with a bunch of other photogs. The doors opened and they all crowded in, the diminutive Eisie found himself in close quarters, surrounded by younger, taller photographers.

He looked around. “I used to be just as tall as all of you,” he said in his German accent. He made a couple dramatic shrugs of his shoulders, the kind of motion you would make if you were carrying something heavy. “The equipment, the equipment,” was all he said."