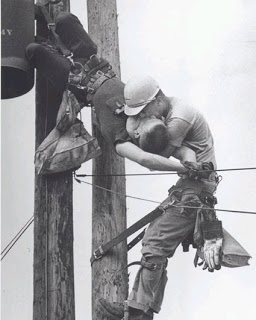 JACKSONVILLE, Fla. (AP) — Photographer Rocco Morabito, whose shot of a utility worker saving the life a fellow lineman who had been shocked by a high-voltage wire won a Pulitzer Prize in 1968, died Sunday. He was 88.
Morabito's health had been declining and he was in hospice care, the Florida Times-Union reported.
His dramatic photograph tagged "Kiss of Life" by a Jacksonville Journal copy editor, appeared in newspapers around the world in 1967. The photo showed an apprentice electrical lineman, who had come into contact with a 4,160-volt line, being resuscitated by a fellow lineman as he dangled from the top of the pole.
His Pulitzer Prize was for Spot News Photography.
"He was a brilliant, instinctive photographer," said Charlie Patton, a Times-Union staff writer who worked with Morabito at the Journal in the late 1970s.
Morabito worked his way into photography for the paper following his decorated service as a B-17 ball-turret gunner in World War II. He had an earlier job with the Journal as a 9-year-old newsboy, selling papers.
His famous photo was taken as he was returning from covering a railroad strike. Before shooting the pictures, he used his car radio to tell the paper to call an ambulance.
In 1958, Life magazine devoted a full page to another Morabito photograph that showed children in an elementary school reciting the Pledge of Allegiance to the flag. Standing with those children, head erect, eyes forward, paws over heart, was a pet rabbit.
Morabito worked for the Journal 42 years, 33 of them as a photographer, until retiring in 1982.
Monroe Gallery is honored to represent several Pulitzer Prize winning photographers.
‹ PREVIOUS   |   NEXT ›