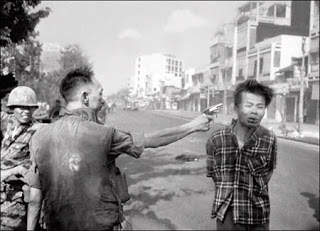 AP Photo hall-of-famer Eddie Adams is a textbook immortal for one Pulitzer frame: his snap of South Vietnamese General Nguyen Ngoc Loan's expedient point-blank execution of a Viet Cong captive. Director Susan Morgan Cooper's tribute to Adams embellishes on original interview footage of the man, who died in 2004, seen here perambulating near his East Village studio. What comes across is a professional, self-effacing, and no B.S. guy. (Disappointed by a charity book collaboration with Caroline Kennedy: "Speak Truth to Power? What the fuck does that mean?") The shame is that there isn't enough candid Adams to quite fill out a film. Infinitely more interesting than listening to antiwar platitudes from the likes of Morley Safer is watching Adams negotiate with his own conscience and an empathy for cut losses that bypasses political righteousness—for the retired Gen. Loan, for the Vietnamese boat people of his 1977 photo essay, and so on. The drama, inevitably, slackens when documenting Adams's move off the war-of-the-week beat to paychecking for the likes of Penthouse and Parade. No slight to Cooper—aside from some misguided musical cues, this is solid work, if essentially PBS/American Masters material. That said, watching oblivious Lilliputian "rocker" Dave Nararro show off his mural of the famous execution ("a reminder of human suffering") for some Cribs cameraman is pretty priceless.