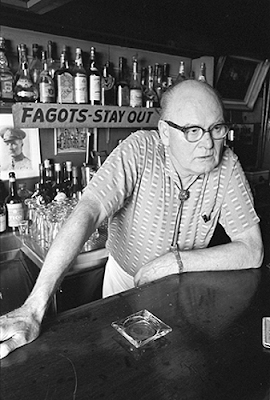 This photo first appeared in Life’s 1964 issue about homosexuality. Barney Anthony put up a sign warning homosexuals to stay out of his Hollywood bar. “I don’t like him,” he said. “There’s no excuse. They’ll approach any nice-looking guy. Anybody does any recruiting, I say shoot him. Who cares?” Photo by Bill Eppridge

The rise and incredible fall of a vicious extortion ring that preyed on prominent gay men in the 1960s.
By William McGowan
Posted Wednesday, July 11, 2012, at 5:00 AM ET
"In the year following the Western Union arrest, the NYPD and the FBI, working in parallel (and sometimes at odds), would uncover and break a massive gay extortion ring whose viciousness and criminal flair was without precedent. Impersonating corrupt vice-squad detectives, members of this ring, known in police parlance as bulls, had used young, often underage men known as chickens to successfully blackmail closeted pillars of the establishment, among them a navy admiral, two generals, a U.S. congressman, a prominent surgeon, an Ivy League professor, a prep school headmaster, and several well-known actors, singers, and television personalities. The ring had operated for almost a decade, had victimized thousands, and had taken in at least $2 million. When he announced in 1966 that the ring had been broken up, Manhattan DA Frank Hogan said the victims had all been shaken down “on the threat that their homosexual proclivities would be exposed unless they paid for silence.”

Though now almost forgotten, the case of “the Chickens and the Bulls” as the NYPD called it (or “Operation Homex,” to the FBI), still stands as the most far-flung, most organized, and most brazen example of homosexual extortion in the nation’s history. And while the Stonewall riot in June 1969 is considered by many to be the pivotal moment in gay civil rights, this case represents an important crux too, marking the first time that the law enforcement establishment actually worked on behalf of victimized gay men, instead of locking them up or shrugging."

Related: People Get Ready: The Struggle For Human Rights