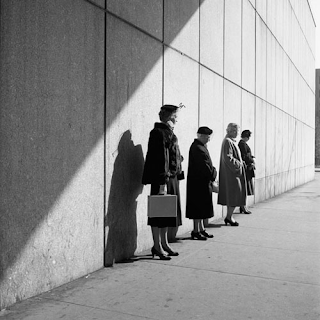 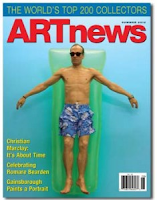 Among eccentric photographers of the 20th century, Vivian Maier stands out for her self-effacing reclusiveness. For much her life she worked as a nanny, and the tens of thousands of images she made remained unknown until a Chicago real-estate agent and amateur historian discovered them in 2007, less than two years before her death. Maier’s black and-white photos mostly depict street life in Chicago and New York, and bear comparison with the works of Helen Levitt, though Maier’s eye was more wide-ranging and her approach occasionally experimental, as when she ventured into pure abstraction in a manner reminiscent of Aaron Siskind. This show of images from the 1950s through the early ’70s offered a generous introduction to her remarkable output.
Like Levitt, Maier had an affection for children, capturing a small boy with one leg thrust forward, holding tight to a man, presumably his father, who adjusts the boy’s shoe. And like Weegee, she sometimes shot the seamier side of urban life, as in a photo of two men dragging another man down the street (Christmas Eve, 1953). But she was equally alert to the glamour of the city, paying homage to beautiful women in elegant hats and opulent furs.

Some of the works here offered startlingly dramatic viewpoints: a man and woman, shot from above, hold hands across a restaurant table; a quartet of older women, pinned in a trapezoid of light, wait against a wall like characters in a Beckett play (1954, New York). Maier’s humorous side surfaced in an untitled image of a ragtag couple, the man standing on his head, in front of a poster for a strip joint. In another, Arbus-like shot, two men—one of them a stooping giant—inspect the goods in a shop window as a pair of curious women gape in amazement.

The show ended with a self-portrait of Maier, smiling wistfully, captured in the reflection of a mirror being unloaded in front of a drab apartment complex—as unassuming in art as she was in life.