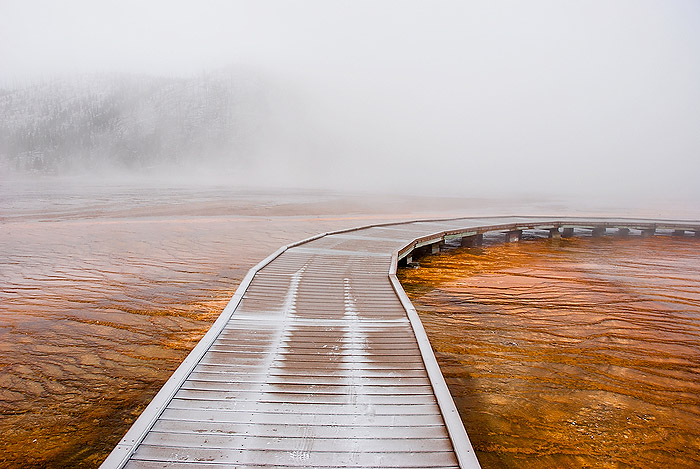 Joe McNaIIy, Yellowstone - Walkway in the Fog, 2006.
©Joe McNaIIy. Courtesy Monroe Gallery
Being at the right place at the right time is a photographer's modus operandi, and photojournalist Joe McNally has had his share of right-place, right-time moments; moments that have resulted in memorable, if not iconic images. In a retrospective of the photographer's work - on view at Monroe Gallery of Photography in Santa Fe through November 23 - more than 45 images stand testament to McNaIIy's discerning eye, both in formal and candid situations. Photos in color and black and white dating from 1978 to 2013 feature subjects of a most eclectic nature not typically associated with one photographer. But given a 30-year career in which McNaIly has contributed to TIME, Newsweek, Fortune, The New York Times Magazine, National Geographic, and LIFE, among others, it is little wonder that his portfolio runs the gamut in terms of subject matter. This includes sports, politics, music, science, portraiture, the natural and urban landscape, and war. lnterestingly, McNaIIy carries the distinction of being the last staff photographer for LIFE, whose pages, over the years, were filled with photographs by Alfred Eisenstaedt, John Loengard, Carl Mydans, Gordon Parks, and W. Eugene Smith.
Among the pictures on display are eight life-size portraits by McNaIly of individuals impacted by the events of 9/11 taken just days following the horrific attack. lncluded are former mayor of New York City Rudolph Giuliani and New York firefighter Joe Hodges, each part of McNally's larger document called Faces of Ground Zero, which traveled around the country and spawned a book by the same title. The one-of-kind, 80 x 40-inch Polaroid photos are mounted on freestanding stanchions placed down the center of the gallery. Whereas each picture by McNally holds a newsworthy narrative, a few nudge into fine art, like Yellowstone— Walkway in the Fog, 2006, in which an unoccupied walkway emerging from the bottom center of the composition curves gently to the right leading the viewer into an otherworldly environment of shimmering, copper-colored mineral water and fog-shrouded background. In the upper left corner is a snow-covered rise where barely visible trees appear like scratchings upon the photographic surface. History-making events and sheer beauty are fully captured through McNally's lens.