The International Center of Photography is getting ready for "a historical revelation", as it unveils plans to put on show the contents of the Mexican Suitcase - a newly-found collection of images by Robert Capa, David Seymour and Gerda Taro .

The 'Mexican Suitcase' - actually three cardboard boxes of negatives - was discovered in 1995 and released to the International Center of Photography in January 2008 after years of secret negotiations with the descendants of a Mexican general who found the work. (See the aticle and slide show here.) 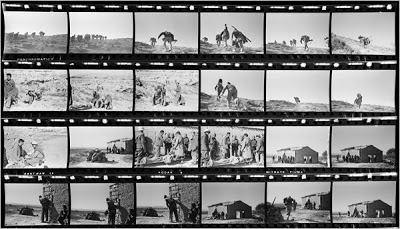 The boxes contained more than 4500 negatives of images shot by Robert Capa, Gerda Taro and Davic "Chim" Seymour. The images were long-feared to be lost after the negatives were left in Capa's studio in Paris when he fled France during the Second World War.

Last year, in an interview with BJP, Cynthia Young, an assistant curator at the ICP said that the suitcase contained "46 Chim rolls, 45 Capa rolls, 32 Taro rolls and three attributed to Capa and Taro, as well as two rolls by Fred Stein." The 4500 images were taken between May 1936 and March 1939, and most of them are from the Spanish Civil War, with the exception of two rolls from Capa's trip to Belgium in May 1939.

And, from September, after two years of scanning and cataloging, visitors will be able to get access to some of the most iconic images as the ICP opens its first Mexican Suitcase exhibition.

The exhibition opens on 24 September and will run for more than three months. "Capa, Chim, and Taro risked their lives to witness history in the making and showing it to the world, and the Mexican Suitcase contains some of their most important works," says the ICP. "The Mexican Suitcase marks a profound shift in the study of these three photographers. In the process of researching the negatives of both major events and mundane details of the war, the authorship of numerous images by Capa, Chim and Taro has been confirmed or reattributed.

"This material not only provides a uniquely rich and panoramic scope of the Spanish Civil War, a conflict that changed the course of European history, but it also demonstrates how the work of these legendary photographers laid the foundation for modern war photography."

The ICP adds: "Equally compelling are the stories of the photographers themselves as revealed through these images: the dashing Capa, the studious Chim, and the intrepid Taro, who died tragically in 1937, during the battle of Brunete."

The Mexican Suitcase exhibition will also include vintage 1930s newspapers and magazines - such as egards, Vu, Life, Schweizer Illustrierte Zeitung, Volks-Illustrierte - in which the images first appeared, providing "an enlightening historical context for the evolving coverage of the war and the growing reliance on the photo essay," says the Center.

To coincide with the exhibition, Steidl, in collaboration with the ICP, will release "a fully-illustrated two-volume catalogue," in which all the negatives in the suitcase will be thoroughly reproduced and accompanied by essays from twenty-one specialists in Spanish Civil War and 1930’s photography."