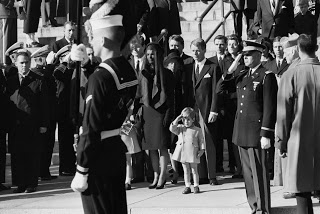 On the cold November day that America buried its slain president in 1963, UPI photographer Stan Stearns was one of hundreds of journalists who watched Jacqueline Bouvier Kennedy and her two children emerge from Washington's St. Matthew's Cathedral veiled with sadness.
As the first lady, Caroline and tiny John stood and watched John F. Kennedy's caisson about to pass by, Stearns poised his camera. Jackie bent down, whispered something into her son's ear, and 3 year-old John's right hand went up.
And with a click, Stearns immortalized John's poignant salute to his young father in a photograph that would crystallize the nation's grief the next morning on the front pages of newspapers and magazines around the world.
...Stearns was a Washington photographer for United Press International when he made the picture that he said lost journalism's Pulitzer Prize by one vote. A Dallas photographer's shot of Jack Ruby shooting Lee Harvey Oswald took the prize that year.