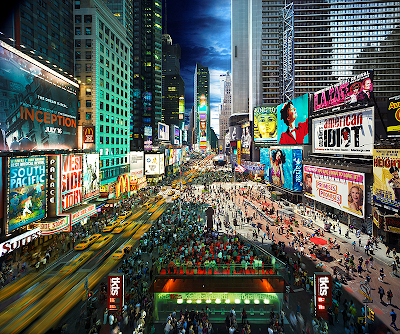 The photographer discusses his new project in which he explores the concept of “changing time” in a single photograph.

OVER THE LAST SEVERAL YEARS, DIGITAL PHOTOGRAPHY TECHNOLOGY HAS REACHED a point where you can create almost any thing you dream up. For Stephen Wilkes this meant turning his fascination with the passage of time within a single photograph into a full-scale, fine-art project titled “Day Into Night.” It comprises digital composites he outputs as limited edition, gallery prints sized at 30 x 40 and 48 x 60 inches. Wilkes made the first image in the series in 2009 when he was on assignment for New York Magazine in downtown Manhattan. The job required him to shoot the expanse of public park known as the High Line that had been built on the site of the 1.45-mile-long elevated rail structure running on the city’s West Side.
To get the shot he wanted—an epic overview of the High Line that still retained intimacy and a human connection—Wilkes photographed from about 40 or 50 feet off the ground in a cherry picker. (Initially, he scouted several nearby rooftops to shoot from but the view lacked both the intimacy and broad scale of the area that he was in search of.)
Using a 4 x 5 camera with a 39-megapixel digital back, Wilkes rotated his camera manually—because the scene was so expansive as it moved from south to north— from atop a tripod throughout the day. He shot hundreds of moments unfolding before him. He kept a constant f-stop but varied the shutter speed to allow for proper exposure as the sun eventually set. Periodically he and his assistant, who was also in the cherry picker, would load images onto a laptop and start creating rough comps to make sure he was getting what he needed.

The final panorama, edited down to between 30 and 50 images and blended seamlessly together in Photoshop, conveys a gradual shift from day to night. What begins on the left side of the image as a warm, bright day filled with picnickers, pedestrians and the blur of traffic below blends toward the right into a dark, somewhat desolate space void of people but eerily lit up by the glow of nearby buildings and lamp posts.

"My favorite thing as an artist is to create a print that actually gives the viewer a visceral experience when they see it,” says Wilkes. “I continue that experience with ‘Day Into Night.’ ”
Wilkes photographs from one camera angle continually for up to 15 hours, then edits down the work to 25 or 30 select shots that are digitally blended into one photograph to capture what he says are “the fleeting moments throughout the day and night.”
Wilkes says he first thought about the idea of using multiple exposures to photograph time shifts while shooting for LIFE magazine on the set of director Baz Luhrmann’s Romeo + Juliet in 1996. The magazine had asked him to create a panoramic gatefold but when he arrived on the set, he realized that the set was actually a huge square. “I decided to take the square and break it apart, à la David Hockney, using individual images,” says Wilkes. “I ended up shooting over 250 images that I then pasted together by hand.”
Wilkes explains that the aspect of passing time came into play in the center of the photograph. There, the stars (Leonardo DiCaprio and Claire Danes) hugged as other actors surrounded them. “To the right side of the photograph was a huge mirror, probably 20 or 30 feet in height, and I asked them to kiss for the reflection image,” Wilkes explains. “That reflection does not match the center embrace and when you look at the photograph quickly you think the image in the mirror is a reflection. But then you realize that the reflection is a time change and a completely different moment. That idea stayed with me.”
A successful commercial shooter, Wilkes has embraced large-format photography in his fine-art work, “because it gives my all-important details greater depth,” he notes. “So much of my work is about levels of story.” That work includes his ethereal, haunting color series of images of neglected buildings on Ellis Island ( Ghosts of Freedom, W. W. Norton & Company, 2006); the dismantled and decaying factory scenes of Bethlehem Steel in Pennsylvania; his series of large-format photographs portraying victims of Hurricane Katrina (“In Katrina’s Wake: Restoring a Sense of Place”); and his three projects on China (“Old and New,” “Factories,” and “Three Gorges Dam”).

“My favorite thing as an artist is to create a print that actually gives the viewer a visceral experience when they see it,” says Wilkes. “I continue that experience with ‘Day Into Night.’ ” In the center of the High Line frame, for example, one can see several children pressed up against a glass partition of an overpass as they watch what’s going on below at street level and it’s easy to imagine their sense of awe and wonderment. Behind them are people sitting, eating, napping, texting on their phones and so on. Keep panning out and more and more of the surrounding buildings and sky broaden the scene and you feel the gradual shift from day to night just as it would happen in real life.
“I’ve been told the images have a Bruegel-like quality,” says Wilkes, who actually studied the Flemish painter’s famed landscape series “The Harvesters” which emphasized not just a time of year and the labors of the period, but the atmosphere and transformation of the landscape itself. “I love Bruegel’s scale, and the idea that he was able to do these epic views yet you could see these workers laboring within the depth of these wheat fields, all busy doing different things, and you could almost read their body language, you could almost feel the breath coming out of their lungs as they were lifting these heavy loads,” Wilkes describes. “I love that.”

He says that during his shoots he loves grabbing fleeting moments, and scanning “every inch of this enormous frame using extreme wide angle perspectives but within that context you can read body language and gesture.” He no longer rotates his camera, as he did during the High Line shoot, but instead establishes perspective, locks it in and doesn’t move the camera for the next 10 to 15 hours. He stays focused on a scene and grabs very specific moments. He even shuts the power off in the cherry picker so it stays still as well. Then he photographs one scene through his lens over and over. “With the new computers on the market today we can now multitask. My assistant usually begins a rough comp on location in Photoshop, and I’m still able capture images simultaneously.” On average he shoots 1,000 images and takes a very specifically edited group of what he considers unique moments during all times of day and night.

Since the High Line shoot he has been all over Manhattan continuing his pursuit of what he describes as “quintessential city portraits.” They include views of Times Square, Central Park in the winter, the Flatiron building and adjacent pedestrian mall (done last year on 9/11 to capture the beams of light from the memorial), Washington Square Park (located in the heart of Greenwich Village), and Gramercy Park (a private park between East 20th and 21st streets off of Park Avenue South). What he loves about shooting in and around Manhattan, he explains, is that there is an abundance of iconic views that meld his love of pure street photography and shooting iconic landscapes. 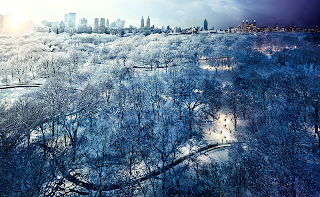 Central Park, Day To Night, 2010
His most recent shoot took place at Gramercy Park this past July. The foreground element of the fence was very important for him to capture, he says, because he wanted to define it as a very private park. “Developing the relationships between the foreground, the middle ground and the background are crucial here,” Wilkes explains. “I’m striving to capture the scope and the epic quality of the city and so I’m working on many different levels. It’s very challenging when you get up there because if you move a foot one way or a foot another way everything changes. It’s a structured process but it can also be a very dynamic, freefalling process. I never know who or what might appear in my frame.”
Wilkes says the nine images he’s created so far will be exhibited for the first time as a series, output at 48 x 60 inches, at ClampArt Gallery in Manhattan this month (the show opens on September 8 and runs through October 29).

At press time Wilkes and his wife, Bette who is also his producer, were already firming up plans and securing permits to shoot at Coney Island. “I have the best seat in the house, I really do,” he says, “and the best part is, no one really looks up or knows I am up there looking down on them. I have become the ultimate voyeur.”
Via Photo District News