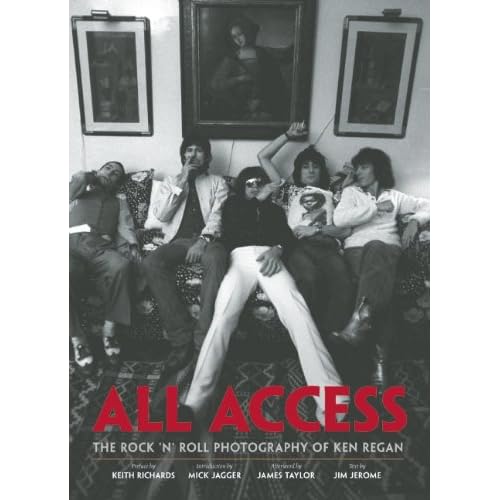 
Ken Regan was there when the Beatles touched down on U.S. soil for the first time in 1964. He caught candid snapshots of their arrival at JFK International Airport in New York City, photographed their backstage downtime at the Ed Sullivan Show and spent a day clowning around with the Fab Four in Central Park.

This is what you call access-the type of proximity and intimacy with artists that have made Regan's images sought-after windows to the most historically significant moments in the last 40 years of rock and roll.

And with his exceptional new book, All Access: The Rock and Roll Photography of Ken Regan, Regan grants you, a little taste of that backstage wonderment.

He palled around with the Stones in 1975 in Montauk. He took Dylan's favorite picture of himself. He hit the gym with Madonna in 1985. He's ridden shotgun with Run DMC in Hollis, Queens.
"I was able to catch many legendary rock pioneers at ease," Regan writes. And as readers will note, it is Regan's "interest in doing more than just photo ops and concert shoots" that delivers some of the most remarkable cultural documents of the past half-century.

All Access is a collection of photographs, but more than that, it is a compilation of memories, stories from the front lines of several revolutions: the rock revolution; Pete Seeger's peace movement and Woodstock ("a photographer's paradise"); and the birth of hip hop.

"As a photojournalist, there were thousands of assignments that I covered over the last four decades," say Regan. "I am forever grateful."
But don't take Ken's word for it.

"You have to know the moment before it happens. To sense it, to feel it," Keith Richards writes in the book's preface. "Whatever this intuitive sense, is what my longtime friend has. Many times I've been onstage only to see Ken's beady left eye drilling through me with that wry grin under his camera and know he's got the shot he was after."

The Stones are generous in their praise of Regan. And Regan is generous with his experience. In the book, he gives readers never-before-heard insider accounts of dozens of events and over 40 artists, for example:

- Woodstock on stage and off
- When Bob Dylan met a young fan named Bruce Springsteen- On and off the road with The Rolling Stones throughout the 70's and the 80's
- Hanging out with his "Big Brother" Bill Graham, who introduced him to Jimi Hendrix, Janis Joplin, The Stones and Bob Dylan
- The Concert for Bangladesh
- Roy Orbison and Johnny Cash in quiet moments at home with their families
- Backstage at Live Aid and Amnesty International

Regan gives the fly-on-the-wall account that only he can give: Just like his photographs, his writing is direct, honest and unclouded by obsequious fandom.

"When you look at the breadth of Ken's work, the first thought is, 'He could not have possibly shot all these'," James Taylor writes in the afterword. "Looking at Ken's remarkable catalog of images, I am reminded of a time when we did not know more about our favorite musicians than we wanted to know. Perhaps that's why we stuck with them  longer."

It certainly gives us reasons--hundreds of them, in both vivid color and intimate black-and-white--to stick with Ken Regan.

About the Author(s):
Ken Regan is an award-winning photographer whose work has appeared on more than 200 magazine covers, including Time, New York Times Magazine, Rolling Stone, People, Newsweek, Life, and Entertainment Weekly. He visually documented such extraordinary concerts as The Band's Last Waltz and George Harrison's Concert for Bangladesh. His previous photography book, Knockout: The Art of Boxing, earned an Independent Book Publishers Gold Medal Award. Regan lives in New York and Massachusetts.

Jim Jerome has coauthored a number of best-selling memoirs, collaborating with leading figures in popular music, film, television, cable news, and business. He has also profiled hundreds of rock, pop, country music, film, and television artists for People, Us, InStyle, and AARP magazines. He lives in New York.