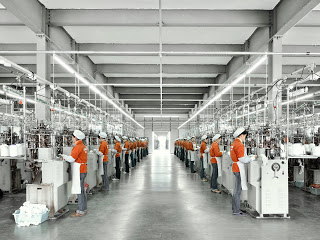 China is big — very big. But the enormity of its land­mass and its mind- boggling population was common knowledge long before multiple- gold- medal- winning swimmer Michael Phelps slipped into his Speedo at the 2008 Beijing Olympics. It would take years of travel and exploration for someone to fully grasp the expansive face of the country, from its most rural enclaves to its burgeoning industrial sector. Photographer Stephen Wilkes has done just that. Beginning in 2005, Wilkes traveled throughout China to photograph a nation rapidly transforming itself— for better or for worse. The result of that three-year undertaking is graphically and beautifully presented in his photographic exposé Stephen Wilkes: China, which opens Friday, Oct. 3, at Monroe Gallery of Photography. Wilkes is known, if not by name, by his photography, which has been reproduced in such notable publications as Time, Fortune, Vanity Fair, Sports Illustrated, and The New York Times Magazine. His color photographs documenting neglected buildings on Ellis Island were shown at Monroe Gallery in 2006. According to the gallery, those photos helped persuade Congress to set aside $ 6 million for the renovation of this once- prominent gateway to America. A landmark in late- 19th- and early- 20th- century American history, Ellis Island remains important to many people who immigrated to the United States, and its dilapidated condition was tragic. But Wilkes’ large- scale photo­graphs of its exterior and interior spaces transcended documentary photography and reached the realm of fine art. Such combinations of documentary and fine- art photography seem to be Wilkes’ forte; his eye for color, symmetry, and subject matter produces imagery that encompasses both genres. His mission of reportage coalesces with his artistic sensibility to generate pictures that are simultaneously instructive and aesthetically beautiful. His current exhibition showcases 20 color photo­graphs ranging in size from 20 inches by 24 inches to one mammoth print measuring 3 feet by 16 feet. That image, Grape Sheds, Turpan Region, China, was taken this year. It is monochrome in palette and Zen- like in its silent, sweeping juxtaposition of man- made structures and sand- blown peaks in the background. Although it is abstract on many levels, what grounds Wilkes’ photograph in reality is the lone male figure perched on a donkey- driven two- wheel cart. The man’s blue jacket provides the only trace of color in the composition, and he demands our attention, despite the panoramic vista before us. According to Wilkes, “ The Grape Sheds image was taken in the Gobi Desert. It took me eight hours to fly there from Shanghai and about a four- hour drive. I was trying to see a side of China untouched by modernization. … One of the fascinating elements in this scene is ... that each one of [the] grape sheds [is] built and owned by individuals. Yet they all look identical. It is the power of the collective, and it transcends old and new China.” Wilkes first visited China in 1978. By e-mail, he told Pasatiempo, “I was a junior in college at Syracuse University, [and] I had heard about a historic trip that the school of Visual and Performing Arts was planning to China. I was at a point in my photography where I was searching to create a body of work that would define who I was as a photographer, [but] I was unable to afford much of the trip, so I offered to document this historic trip for the university as a trade-off for much of the expenses.” That was two years after the end of China’s Cultural Revolution. “[ In 1978], the country was so backward in terms of products and technology … [it] seemed more like 1958,” Wilkes said. “ Civilians were in blue; the military in green. There were virtually no automobiles except for a few Russian- made diplomatic cars, circa 1940.” Despite those conditions, his lasting memories of China were of its people, “ whether it was a dancer in a school for gifted children or an elderly man carving a cinnabar vase. Each [ person] had an extraordinary focus in [his or her] eyes and a deep dedication to be the very best.” According to gallery owner Sidney Monroe, a portfolio of work from Wilkes’ 1978 excursion to China will be available for review during the exhibit. Wilkes’ new show centers less on China’s people and more on the country’s dramatic transformation from an agrarian economy to that of an industrialized nation. That change is documented in pictures that are fascinating, disconcerting, and visually lovely. But what’s curious is Wilkes’ ability to photograph such remarkable scenes devoid of large numbers of people. It’s as if, moments before releasing the shutter, he tells thousands of people to vanish — except for those few he retains to provide human presence and scale. The shortage of people in Wilkes’ urban- based photographs recalls the photographic cityscape of Paris made by French painter and photographic pioneer Louis- Jacques- Mandé Daguerre ( 1787- 1851) in 1839. Paris Boulevard, photographed by Daguerre from a balcony window, depicts a main thoroughfare in the City of Light, but the scene is populated by only one man, his foot raised on a shoeshine stand. Why are there no other people? It’s a question put to many Photography 101 students. The answer is simple. Due to the long exposure time, anyone or anything that moved — Parisians walking, horses and buggies, even the busily working shoeshine boy — was not recorded by Daguerre’s camera.

An image by Wilkes that speaks directly to the old and the new in China is Three Gorges Dam at Yangtze River, Jui Li Village, Sandouping, Yichang, Humei, China, shot in 2008. The village is photographed from an elevated vantage point, and Wilkes’ perspective is revealing. Reading like a diptych, the image is bisected by a concrete barrier. On the right are multiple housing units and various businesses that have existed for some time; on the left, below the newly constructed dam, is part of a mountain that has been stripped away to accommodate a concrete tunnel that looks like it could be the entrance to Area 51. The village to the right seems doomed by development that will require the displacement of more of its people. Wilkes admits: “Cities I remember visiting 30 years ago are virtually unrecognizable today.” The amount of visual information in this photograph is remarkable. As Monroe points out, “There are at least five narrative vignettes going on in the picture.” It’s all in the details. Wilkes’ sense of symmetry comes through in Boy in Artspace, Beijing, photographed in 2007. The image presents a massive interior space with a wall of windows on the right and a buttressed curved ceiling that extends to the left. A beam with intermittent industrial lights runs down the middle of the ceiling. Disrupting Wilkes’ perspective of this cavernous building is a red partial wall that spans the entire width of the picture, greatly restricting our vision to the foreground. Standing at attention directly in the middle of the red wall, in front of a vertical concrete support, is a little boy who stares at the viewer. The singular human presence within this overwhelming construct is surreal. But the confluence of geometric forms with the vertical and horizontal elements in the picture make for one of Wilkes’ most dynamic bilateral compositions — which is fitting, given the country’s state of transition. “ China is changing at a speed that is unprecedented in modern history,” Wilkes said. “ I believe it will be the story over the next 25 years. I have tried to capture images which show not only the scale and magnitude of this change but [ also] its effect on the balance between the old China and the new.” ◀ details ▼ Stephen Wilkes: China ▼ Opening reception 5-7 p.m. Friday, Oct. 3; exhibit through Nov. 23 ▼ Monroe Gallery of Photography, 112 Don Gaspar Ave., 992-0800