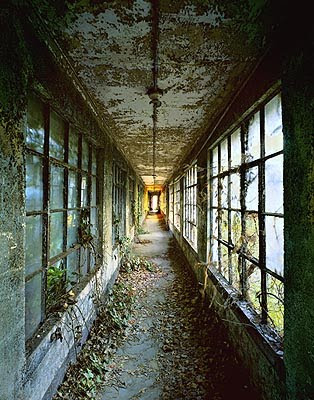 It's hard to imagine a place that says more about the American experience than Ellis Island. For twelve million people, Ellis Island was the doorway to a new life. The hopes and dreams of several generations of immigrants began and sometimes ended there, and there are few American families who can't trace their heritage back to someone whose first footsteps on American soil happened at Ellis Island. For five years, renowned photographer Stephen Wilkes had free reign of the island's hospital complex. Neglected for nearly fifty years, the buildings were in an extreme state of disrepair: lead paint peeled from the ceilings and walls, vines and trees grew through the floorboards of once cramped wards. In these long-abandoned spaces, Wilkes discovered an unyielding solitude, yet also found undeniable evidence of life, not only in the implicit remembrances of the people who resided there, but in the radiant, beckoning light in which these scenes were captured.

Organized by the Michener Art Museum with the cooperation the George Eastman House, Rochester, and ClampArt Gallery, New York, this exhibition presents a selection of Wilkes's evocative contemporary images of Ellis Island as well as a group of vintage prints from the Eastman House collection by the legendary photographer Lewis Hine (1874-1940), who began documenting the immigrant experience around 1904 and produced a major body of work focusing specifically on Ellis Island.