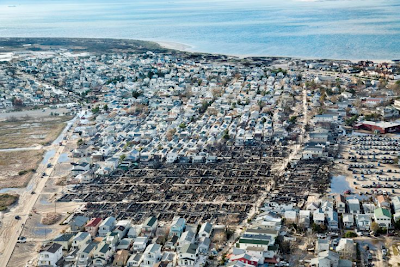 Stephen Wilkes for TIME
Breezy Point, N.Y.: On the night Sandy made landfall, a fire swept through this community on the tip of the Rockaway Peninsula, consuming more than 100 homes.
Full slideshow here.
Flooded, Uprooted, Burned: The Tracks of Sandy on the ShoreVia Time LightBox


"After TIME commissioned me, along with four other photographers, to capture Hurricane Sandy using Instagram, I and many of my colleagues felt a deep personal need to go back and document the aftermath. I’ve covered disasters in other parts of our country, but this is my hometown, and Sandy was a storm of historical significance. I’ve often found that there is great power in telling difficult stories in a beautiful way. Interest in any given story wanes so quickly, yet it’s only through taking the time to go deeper that we get to a place of real understanding. I had to return to this story, and I wanted try to comprehend the scale of this storm. The only way for me to capture Sandy’s destructive fury was from above.

On the Sunday after Sandy made landfall, I decided to rent a helicopter and fly over some of the most devastated areas, including the New Jersey shore, Breezy Point and Far Rockaway. It was a beautiful day to fly, but unfortunately that beauty quickly eroded into shock as we began to get close to the coasts. It was everything I’d heard about, but it was difficult to believe what I was actually seeing. Once we got above the shoreline, I really started to understand the scale of the destruction. The expanse of land it ruined, the totality of the devastation — it was like a giant mallet had swung in circles around the area. It was mind numbing.

When I got home that night, the images still in my mind made it impossible to sleep. Through various points of this storm, it felt like we were all living through a science fiction movie. Seeing these devastated towns from above showed the cold reality of this storm’s severity.

From above, I realized how close particular neighborhoods were to bays or oceans. Sometimes, it was a matter of two blocks, and it’s a proximity not immediately apparent when you’re on the ground. In Breezy Point, for example, I knew that more than 80 homes had burned down in a fire, but nothing could have prepared me for what I actually saw. The blackened and charred blocks of homes viewed as a giant physical scar across the landscape. Seeing how much land was affected and yet how many homes were saved, made me think of the firefighters and how hard they must have worked just to contain this fire.

In flying over Staten Island, I was really struck by the marina, and how the boats were physically lifted from the pier and tossed together. It looked like a child’s game—huge, 40-ft. boats being thrown around like toys. We then flew over Oakwood, where I saw a house that had been lifted and dragged through a field of cattails; its path clearly visible days later, having left a trail of destruction through the cattails.

Sandy was a warning shot. I’ve had a unique view of what’s happened on a physical level. But the emotional toll has yet to be measured. It’s my hope that these images serve as a wakeup call — whether that call is about global warming, infrastructure, or just the recognition that the world is changing, it’s a reminder that we need to take special care of our fragile world." -- Stephen Wilkes


Stephen Wilkes is a fine-art and commercial photographer based in New York. Wilkes was awarded the Photo District News Award of Excellence in 2011 and 2012.

Wilkes’ work will be part of a Sandy relief benefit auction hosted by 20×200 and TIME. Visit LightBox on Monday for more information.