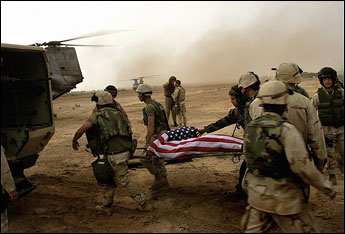 
The fifth annual FotoWeek DC is upon us, and Reporters Without Borders is hosting one of its weightiest shows. â€œ101 Images for Press Freedomâ€ captures the history of photojournalism, beginning with the Spanish Civil War and culminating with the 2010 Haitian earthquake. Included in the exhibit are works by renowned photojournalists like Robert Capa and Henri Cartier-Bresson, as well as iconic images associated with major events, like the Tienanmen Square protests. The showâ€™s goal is to remind viewers just how much photojournalists sacrifice on the job. In conjunction with the exhibit, tonight the Corcoran Gallery of Art hosts â€œTransforming Society Through Photos: The Role of Free and Independent Photojournalism,â€ a discussion with with Magnum Photo Agency photographers Larry Towell and Peter van Agtmael and Washington Post Director of Photography MaryAnne Golon about photojournalismâ€™s role in society. Donâ€™t go expecting too many Instagram shots.

In conjunction with the exhibit, the Corcoran Gallery of Art hosts â€œTransforming Society Through Photos: The Role of Free and Independent Photojournalism." Wednesday, Nov. 14, 2012.