STEVE SCHAPIRO: "“I don’t think I’ve yet taken my most important photograph" 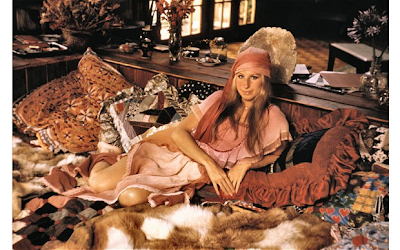 Barbra Streisand, 1970. 'We shot this at her house in Malibu. She has extremely good taste and strong ideas about how pictures should be.'
Photo: Steve Schapiro
Via The Telegraph


How did photographer Steve Schapiro go from documenting the lives of drug addicts and immigrants to spending months trailing Hollywood’s biggest stars? ‘I was quiet and polite,’ he tells Lucy Davies

Steve Schapiro learnt not to be intimidated by fame at an early age. As a teenager, long before he became a fixture of film sets and rock star mansions, Schapiro was determined to become “the world’s greatest novelist”. So he enrolled at Bard College in upstate New York, where he had tutorials with author Saul Bellow; they walked in the woods together, discussing Dostoevsky. But after a five-week sojourn in Paris and Spain working through the night on a novel, he realised there were “only four good pages in the whole thing. It was at that point I took up photography.”
Until then, it had been his hobby – something to do on holiday. He had a small, Bakelite camera called an Argoflex that he sometimes took outside on the streets near his home in the Bronx. “It seemed to me that the best thing you could do was work for Life magazine, so I began my own projects that were similar to the things they published – drug addicts in East Harlem, Haight Ashbury. I would keep going back to Life every few weeks to persuade them to hire me.”
In 1959, his story on migrant workers in Arkansas was picked up by a small magazine called Jubilee: “The New York Times saw it and asked if they could use one on their cover. It was really a terrific moment for someone just starting out.”
Life finally commissioned him – a portrait of Patrick Dennis, author of hit comic novel Auntie Mame. “I’d heard that Life photographers liked to photograph people in a bathtub – I don’t think it was necessarily true – but I brought along some bubble bath and persuaded him to do it. It ran full page.” The rest of the pack followed suit: Look, Time, Newsweek, Rolling Stone.
“Even though I was in my twenties, I looked about 16, and I was quiet and polite. Everyone liked me. I travelled with Bobby Kennedy, I photographed the Selma March with Martin Luther King. I did Andy Warhol in The Factory and Muhammad Ali. I never knew where I would be in two days because I was always on the plane.”

Alongside the political stories he was making his name on the entertainment pages. His photograph of Dustin Hoffman for Look became the logo for Midnight Cowboy, then Otto Preminger hired him to take the onset photographs for The Cardinal, which was nominated for six Academy Awards.

While working on the lots he heard that Marlon Brando was going to be in Paramount’s forthcoming production of The Godfather. “At the time Brando was the top actor, so I went to Life and I got them to guarantee a cover, which they never do – they wouldn’t even do it for Frank Sinatra. I went back to Paramount and, of course, they agreed. I ended up working on the entire film.” Schapiro’s shots of Brando, Pacino et al are now classics of still photography. Everybody saw them, and everybody wanted Schapiro to photograph them. At the time it wasn’t unusual for him to spend four days, even six months, with a personality, one-to-one. “It often seemed we were the best of friends,” he says.

The only person he found difficult was Charles Bronson: “very brash”. Generally, though, his shoots were amiable collaborations. “For me there’s no difference between photographing a celebrity and a migrant worker. You’re always looking for a picture with emotion, design and information. I leave a lot of room for self-expression. I want my subjects to be themselves, and then I quietly pounce.”

Now 78, Schapiro lives in Chicago with his wife and youngest son. He continues to photograph and recently worked with his son on a photo story about the ageing hippie generation. “I don’t think I’ve yet taken my most important photograph,” he says. “I’m happy with many of the images. But I always look to the future.”

This article also appeared in SEVEN magazine, free with the Sunday Telegraph. Follow us on Twitter @TelegraphSeven