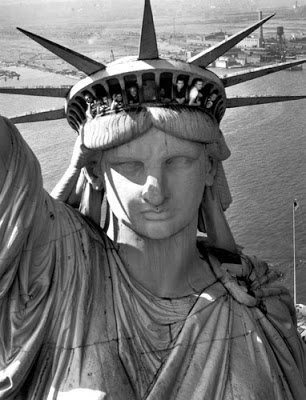 For one of the best views of New York, you have to get inside a great lady’s head.

Via NBC News
Starting this weekend, it’s possible again as the Statue of Liberty crown reopens to the public on Sunday after a year of renovations. Visitors seeking magnificent vistas of the Big Apple and a glimpse of the famous monument’s inner workings are already snapping up tickets online.
“It’s an experience that stays with you for your entire lifetime,” said Chris Heywood, a spokesman for New York City’s official tourism agency NYC & Company, who still remembers making the climb as a child.
“The Statue of Liberty remains one of the city’s most iconic attractions and there certainly will be a pent up demand for visitors to want to go up and see the crown.”
The renovations promise better access and safer conditions. There are two new staircases, a new elevator inside the pedestal and a lift that will take visitors who are mobility impaired higher into the monument than ever before, said Mindi Rambo, a spokeswoman for the National Parks of New York Harbor.
“For the first time, people in wheelchairs will be able to go up to the top of the pedestal and actually see into the statue, whereas before, the highest level that they ever really got to was the museum level,” Rambo said.
“The lift is brand new, we’ve never had that before and we’re very excited about it.”
There is no elevator service from Lady Liberty’s feet to her head, so visitors must still go up a double spiral staircase to reach the crown. Official pamphlets warn it’s a strenuous journey, but Heywood recalled that it feels short “when you’re looking forward to a view that’s stunning.”
It takes adults up to 20 minutes to make the climb depending on whether they stop to examine the statue’s inner architecture and copper skin, Rambo said.
“You can see the folds of the robe, the interior of the statue, and many people find that fascinating. They stop to take photos and point things out to their kids like, ‘Oh, that looks like the back of her heel,’” Rambo said.
Once at the top, only 10 adults can fit inside the crown, a space that’s much smaller than people expect, Rambo added. Visitors often tell park rangers that they have come because they remember making the trip as a child and want their kids to have the same experience.
“I think part of that is just driven by the ability to say that they have made that climb and to look out into the harbor and, I suppose in a way, to look back in time to when people came on the big steam ships,” Rambo said.
The crown will be open each week from Thursday through Sunday. If you’d like to visit, you must make a reservation through Statue Cruises – the monument’s ferry transportation provider.

Tickets became available on October 1 and sales have been brisk: just a few dates in December remain available for 2012.

This is the second time in recent years that the National Park Service is reopening the statue’s crown. The attraction was closed after the 9/11 attacks for security reasons and then reopened on July 4, 2009. 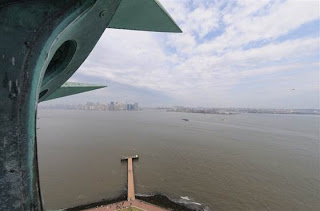 National Park Service
Visitors to the crown of the Statue of Liberty get a great look at New York Harbor. 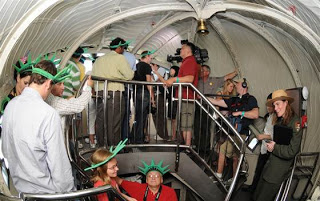 The chance to make the climb will give travelers just one more reason to visit New York, which is on track to set another record year for tourism, Heywood said.
Sunday’s crown reopening also coincides with the 126th anniversary of the statue’s dedication. 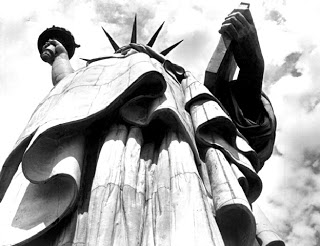