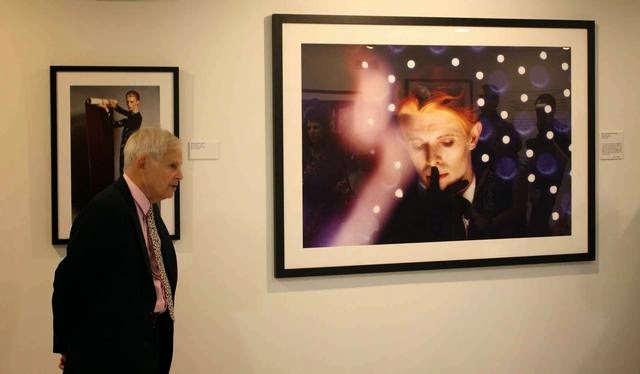 
Steve Schapiro's photographs occupy and navigate a space that is deeply human and soulful, encouraging his subjects to feel able to open their own apertures and shred any facade. David Bowie, more often a series of personas than a man, is captured by Schapiro as rawly human, even vulnerable at times, even if he is in character. The works in Schapiro's exhibition, "Warhol, Reed, and Bowie" at the Ed Pashcke Art Center acts as an archive of this ability. Some of these images are iconic; Bowie Smoking a Cigarette once graced the cover of Rolling Stone.

Schapiro spoke with me on the phone recently about this show, his past work and future projects. He has a way about him that encourages, even insists on, making his subjects comfortable in front of his lens.

CHICAGOIST: So you discovered photography at summer camp at the age of 9? Was that your first time with a camera?

STEVE SCHAPIRO: I think it was first time and I guess it was probably a Brownie camera, and I took pictures at the camp. What really excited me is that we developed our own film and to see them come out of the water, out of the chemicals, and to see the clouds and all of that to me was very exciting and it started me in being interested in taking a lot of pictures. Henri Cartier-Bresson's The Decisive Moment came out and that was an incredible book at the time and it is amazing how he caught the peak of action and also had such great design and gave you a sense of where you were and really made me decide I really wanted to become a photographer.

C: What about the beginning of your professional career? How did all of that start?

STEVE SCHAPIRO: When I was growing up as a journalistic photographer, the thing you could most hope for was to become a Life magazine photographer. So I set my sights on that and I started doing projects on my own. I spent four weeks at a migrant workers camp in Arkansas and that was one of the projects I did on my own. I came back and there was a small Catholic magazine called, Jubilee, and they would give you six to eight pages to do a portfolio. So I got my first portfolio printed on the migrant workers and the The New York Times picked up one of the pictures and used it as the cover shot for their magazine section, and I gradually worked into Life magazine and did quite a bit for them and for other magazines.

C: You're a great observer of humanity, even with iconic, larger-then-life figures like Bowie. I am thinking specifically of the Bowie photograph from The Man Who Fell to Earth, one of the highlights of the show. This was printed at the last minute for this exhibit, correct? There is a somberness and vulnerability in this work while it is magical.

STEVE SCHAPIRO: It's an image that was never printed till about two weeks before the show. I looked at that transparency and realized it is a really good picture, and it was only when I thought we needed another Bowie picture to round out the exhibit that I went back and looked at the transparencies and I found this image. It had never been edited or printed. It is entirely untouched.

C: Can you talk about how you tap into the personality of your subjects?

STEVE SCHAPIRO: Basically, when I am photographing, I try to be very quiet. When I am with someone I don't want to have a conversation with them because then they would be talking to me and they're not really being themselves. Their thoughts are what they are saying to me and what I am saying to them. I just look for those moments when there is something in their eyes or an attitude, something that shows the spirit of that person.

C: Another favorite of mine is the one of Warhol holding that displeased dog. So much is captured in that image.

STEVE SCHAPIRO: With that picture of Warhol, the Velvet Underground had done a concert and the promoter wasn't paying them for three weeks and there was this place that looked a castle in the Hollywood Hills and the person who owned it let them camp there. I was just walking around with Andy and suddenly he saw this dog and picked it up, and that was the picture. It wasn't anything we spent any time on and it is a very warm picture and a different side of him.

C: Do you find when you are photographing a performer like Bowie, a quintessential performer and artist, I am thinking, like you were saying, he was very aware he was being photographed, but he also seemed to put his guard down for you. Can you talk about that?

STEVE SCHAPIRO: I think Bowie is very smart and I think he has a great sense of images and in coming up with new kinds of images. The first session I did with him started at four in the afternoon and ended at four the next morning when I did that picture of him on the motorcycle, and we used the headlights of a car to light it. He would constantly come up with new costumes and I would pick up my camera to photograph him and it would be an incredible outfit, but he would stop me and say, "Wait a minute, I need to fix something," and he would go to the dressing room and come back 20 minutes later in something totally different. Fortunately, there would be a lot of things he would try on, so we would get a lot of pictures. The picture of him smoking a cigarette was a cover of Rolling Stone and it has been used a lot, but it was originally the cover for Rolling Stone.

C: Photographing celebrities aside, could you talk about your work with the everyman: the series of the migrant workers you talked about and also the addicts you photographed in East Harlem. I am wondering what drew you to these subjects.

STEVE SCHAPIRO: They're both highly emotional subjects where there are problems involved, and from a human basis, they are interesting situations to cover. I have a book coming out next year about the hippie movement of today. I photographed Haight-Ashbury in 1967 and it was the center of the hippie movement. My son and I photographed between 2011 and 2012 a lot of music festivals and situations like that and we photographed the spirit of a whole new generation who are not as much into drugs but into meditation and are conscious of organic food and good eating. Today there are these music festivals and there are people who just go from one to another and it is, in a sense, their religion. I met this one man who said I am not a Catholic, not a Baptist, I am a festivaltarian. What he meant was that, spirituality, he got an inner sense of a spiritual high. The books is really about the joy people have.

C: Any other projects?

STEVE SCHAPIRO: I am doing a new book on Misericordia, started by Sister Rosemary, a Catholic nun, and it is a place that is now 35 acres in upper Chicago. It is really for people who have developmental difficulties and it is an amazing place just filled with joy. It is really a joyful place, and that's the book I am working on right now.
C: To close, do you photograph everyday?

STEVE SCHAPIRO: I try to, and particularly when I am working on a specific project, I try to maintain a continuity. The Barbara Steisand book comes out in November and I am working on a Civil Rights book, so at the same time I am shooting new stuff, I am also going through old stuff for these books.
Slideshow here.