I was in Rwanda after the genocide, which was very difficult. Not only was there the evidence and smell of death lingering in many places, but it was also distressing to see the tidal wave of human displacement, orphaned children, and people with literally no place to go. I shot this picture in panorama format, as I was trying to get across the enormous sweep of this very large refugee camp in the volcanic highland area of the Rwandan-Zairean border. (Zaire is now the Congo.)

What you donâ€™t see in this picture is the crowd of some 300 to 400 people watching me shoot it. She was standing there, alone, and her simple, sweet, uncertain stance certainly made for a photograph. But I had an enormous crowd following me around, as visitors to a refugee camp often become that dayâ€™s movie. I crouched on the ground behind my tripod, shooting quickly, begging everyone to stay behind me. And, even though I was concentrating on making the picture, I became aware of the light touch of childrenâ€™s fingers on my skin and hair. They were gently pinching and rubbing my skin, and pulling my hair. A white person was still strange to them and I believe they thought my coloration would somehow rub off and there would the more familiar black skin they were used to underneath. And my hair? Well that was really different, and the object of much interest. --Joe McNally 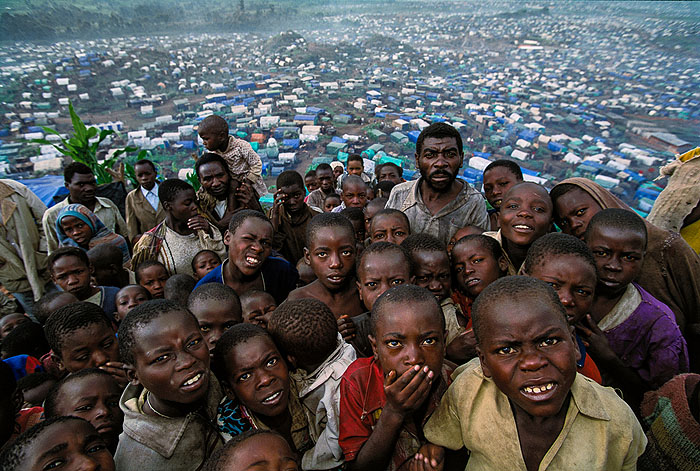