Correspondent Jonathan Blaustein is back with a report from the summer gallery shows in Santa Fe.

Since the last article I wrote for APE, I’ve spent the summer doing the usual things. Making new photographs for “The Value of a Dollar,” weeding in the yard, and running after my young son. Average summer duties. Beyond that, I released a limited edition print to benefit the UN World Food Programme through the collect.give, had the opportunity to hear public lectures by Jonathan Torgovnik, Mary Virginia Swanson, Christopher James, Cig Harvey through the Santa Fe Workshops.

But unlike New York, which quiets down in Summer, in Northern New Mexico it’s high Season. That means busloads of tourists. And tourists like art. So many of the big blockbuster photo exhibitions take place now, rather than in the Fall or Spring. The book designer and blogger Elizabeth Avedon did a blog post previewing the Santa Fe summer scene a couple of months ago, so I thought I’d go see what was on the wall, and report back to the APE audience.

I began my little adventure at photo-eye, which is undoubtedly the photography institution in Santa Fe. The owner, Rixon Reed and his crew recently celebrated their 30th Anniversary. They offer a lot to the community, including a great photo-book store, a sleek photo gallery, and a program of public events and artist salons. The current exhibit in the gallery is a three-person show featuring work by Edward Ranney, Mitch Dobrowner, and Chris McCaw. All three work in black and white, and have differing perspectives on the landscape. 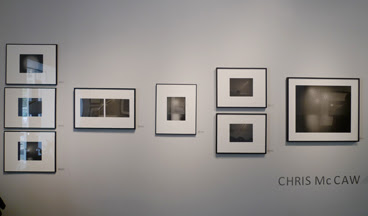 Edward Ranney, a long time NM resident, just published a book with Lucy Lippard that investigates the nearby Galisteo Basin. It was home to pre- and post-Columbian Native American culture for centuries. Ranney’s stark photos are printed without heavy or dramatic contrast, and create the impression of timelessness. Some images depict remnants of earlier cultures, and some do not. Together, they give the impression that the land, with its volcanoes and rocky cliffs, works with a timeframe that mocks the ephemeral.


Mitch Dobrowner’s large-scale landscape prints, by comparison, are dramatic and literal. They’re very beautiful, to be sure, but lack imagination. One exception, a triptych of clouds moving across Shiprock, in the Navajo Nation, is tremendous. Particularly if one has traveled through the Four Corners, as the natural beauty juxtaposes against a hard-core culture of poverty and isolation.

Chris McCaw’s photographs have been exhibited widely of late in NYC, LA, and SF. His work is original and visually engaging, and was recently collected by the Metropolitan Museum of Art. McCaw uses a large format camera, and allows the sun to burn its way through photographic paper that takes the place of film, utilizing long exposures. So the paper will show the literal mark of the sun, which shares the rectangle with land & oceanscapes. The balance of creation and destruction is timely and visceral. Killer stuff.

Andrew Smith, at his eponymous gallery, has the other major old-school place in town. The gallery had an installation on the wall by William Christenberry that I was excited to see. There were 20 small prints, in frames, leaning against the wall in two horizontal rows, (one above the other,) sitting on a wooden rail. Like much of his work, the images were made of the same subject, re-photographed over time. In this case, it was an old sharecropper’s house in Alabama, shot between 1978 and 2005. In early images, an old blue car is parked in front of the house, and in some an African-American family is standing on the front porch. As the sequence resolves itself, the car and family disappear, and the house slowly degrades to ruin. It’s a powerful depiction of the cold efficiency of time, and a strong metaphor for the problems facing rural society in the United States.

Smith’s gallery also has a ridiculous display of historical work, hung salon-style, in several rooms on two floors. I’ve never been anywhere like it, outside of a major museum. Ansel Adams, Carleton Watkins, Muybridge, William Henry Jackson, Steichen, Friedlander, Eliot Erwitt, and many other legends of photography are well represented. It’s so full, in fact, that I spotted a vintage print by Walker Evans of the Alabama tenant farmer’s wife, the image that Sherri Levine appropriated years later. It was a foot and a half off the floor, down in a corner by a door-frame. That tells you a bit about how much of photography’s history is crammed into this space. Not to be missed.


Verve Gallery, on Marcy St, has a huge following in Santa Fe. I’ve seen several shows there, and they tend to have three person exhibitions, from what I can tell. The work leans towards photo-journalism and documentary photography, with some exceptions. They are currently showing two documentarians, Jeffrey Becom and Nevada Wier, alongside digital conjurer Maggie Taylor. The former offerings were not super-interesting to me, but Taylor’s work is fantastic, and worth a visit. She creates surreal images that layer taken and found photographs, arriving at an original vision with a unique color palette. Taylor has been working this way for a while, and ten years ago, before Photoshop’s ubiquity, there would have been a “how did she do that” quality that is no longer to be mined. But the photographs are compelling, creating a stream of characters out of a Greek Mythology, with rams heads and rhinos and fish men. 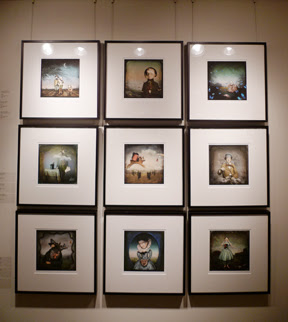 Monroe Gallery is another of Santa Fe’s photo spots that has a national reputation, as they show historical photojournalism from the early to mid-20th Century. It’s a different period and style than you see at Andrew Smith, but equally relevant to American photography lovers. This Summer, they’ve got an exhibition in the front room by Bill Eppridge. One wall focused on photos of Robert Kennedy during his campaign for the Democratic Nomination in 1968. Very Iconographic. One image showed Kennedy riding in an open convertible with NFL greats the “Fearsome Foursome.” It stopped me, due to the reference to his brother’s assassination, of course, but also because it seemed like such an anachronism. Can anyone imagine a scene like that transpiring in 2010? 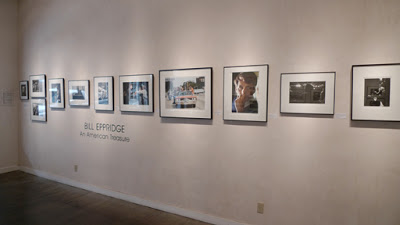 Eight Modern is a relative newcomer, compared to the SF institutions mentioned above. It’s a contemporary art gallery in an old adobe building, just off of Canyon Road. 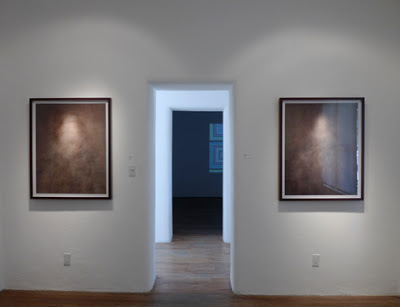 While they often show painting and sculpture in a beautiful setting, the June/July show was by the Chicago conceptual artist Jason Salavon. He uses the computer to make original work from historical masterpieces, and shows digital projections, video installation, abstract prints, and digital C-prints, which I’d classify as photographs.

The front room contained two pieces that were haunting, smart and original. Salavon created montages of portraits by Velasquez and van Dyck that show just the ghostly suggestion of classical portrait sitters to create a meta-portrait. The layers of brown and ochre, and the subtle look of under-painting, are rendered digital and morphed into hyper-real. The spot where the face resides is not recognizable, per se, but is lighter in color in just the way to suggest what it was. It was probably the best work I saw on my gallery crawl. (But that bespeaks my bias towards the contemporary and conceptual, obviously.)

Finally, I saw one show down I-25 in Albuquerque at the Richard Levy Gallery. I’m including it because why not, as Levy shows contemporary international work in a great downtown space. (And I happened to be in ABQ briefly one day.) His current exhibition is by Manjari Sharma, the Mumbai and New York based photographer whose “Shower Series” has gotten lots of exposure on the web. (Burn Magazine, Lensscratch, Fraction Magazine’s blog & more.) While I’ve seen the jpegs many times, it was good to experience the large prints on the wall. She’s photographed a mix of attractive, multi-racial people who agree to take a shower in her apartment. None of the photos depict the subjects looking at the camera. They’re caught in what appear to be private, contemplative moments. So while the work is visually engaging, I was interested in the way it called attention to the artificial nature and forced intimacy of photographer/sitter relationship.

Well, that was a lot of information, I know. If you’ve made it this far into the article, you’re obviously interested in photography, or Santa Fe, or both. That, or it’s quiet today and you have some time to kill. Regardless, I’d encourage a trip out to New Mexico if you’ve not been before. All the above galleries show high quality work on a regular basis, and you can add Site Santa Fe, the NM Museum of Art, James Kelly Contemporary, Zane Bennett Contemporary Art, and the NM History Museum to the list. And in case you were wondering, I’m not a covert member of the Chamber of Commerce. I assure you.