CHARLOTTE, N.C., Aug. 23, 2012 /PRNewswire/ -- Affirming the power of free speech and expression, The Echo Foundation celebrates powerful photojournalism with a two-part series that addresses justice, democracy and humanity. While honoring the work of a respected force in photojournalism, the foundation engages the next generation of emerging photographers.

Echo's election year series – "We the People. The Voices and Vision of Democracy." – proudly presents the extraordinary work of revered photographer Bill Eppridge and his exhibit entitled "One America, One American: Robert F. Kennedy Through the Lens of Bill Eppridge." Housed in The Charlotte Observer gallery, the exhibition is open to the public September 4 – October 19.

Eppridge, a veteran photojournalist, has worked for prominent publications including National Geographic, LIFE Magazine and Sports Illustrated. The exhibit contains nearly 40 intimate RFK photographs and reflections by Eppridge, who traveled the campaign trail with the senator in 1966-1968. 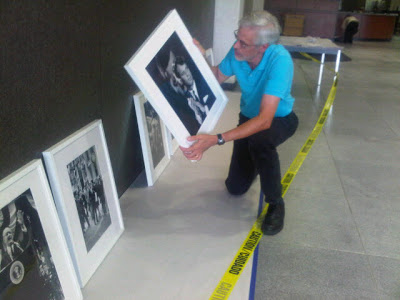 To inspire students worldwide, Echo's international photojournalism competition invited students to submit original photography responding to the question, "What does democracy or tyranny; justice or injustice look like?" More than 500 entries from students representing 40 countries across the globe were submitted.

New York Times Senior Photographer Tyler Hicks judged the competition and awarded the grand prize to Tobin Jones, a graduate student at the University of Westminster in the United Kingdom, who submitted a photo taken in the Kibera slum of Nairobi, Kenya.

The student photojournalist describes his photo, titled "Religious Healing," as a priest in a Kenyan slum trying to exorcise a demon tormenting one of his parishioners. Jones says, "In Kibera, religion, as a money-making opportunity, has taken on a whole new dimension; often cheating people in the slum of their hard earned money."

Hicks explains, "Telling the story succinctly in a single image, this photograph speaks not only to injustice in Kibera, but also to a larger audience about the endemic poverty crisis in Africa."

Jones will travel to Charlotte during the Democratic National Convention where his winning photograph will be on display next to Eppridge's iconic pieces in the exhibit. In addition, Jones has the opportunity to photograph for one day alongside Eppridge during the convention.


About The Echo Foundation
The Echo Foundation was founded in 1997 to carry on the message Nobel Peace Prize winner Elie Wiesel brought to Charlotte that year – a call to action for human dignity, justice and moral courage. Through comprehensive education programs, Echo equips individuals with moral and intellectual tools necessary to create positive change. For more information, please visit www.echofoundation.org.

2011 Lucie Awards: Bill Eppridge is Honoree for Achivement in Photojournalism