Selections from People Get Ready: The Struggle For Human Rights 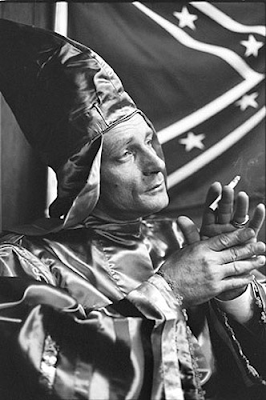 
Bill Eppridge received a call from his editors at Life magazine that Robert Shelton of the United Klans of America had consented to being photographed. He drove to Tuscaloosa, Alabama and Shelton allowed Eppridge to photograph him in his Imperial Wizard robes as he smoked a cigarette. Shelton drove him around town in a Cadillac that was equipped with police radios. Late in the afternoon, Shelton told Eppridge he knew a pilot and offered Eppridge a ride back to Birmingham in a small plane. Eppridge weighed his options - by the time he got to the airport, returned the rental car, checked his bags and re-packed his cameras, he thought it might take just as long driving back. He decided to drive and just kept going until he arrived in Birmingham a little over an hour later. Once back at his hotel, he went up to the room where the Life reporter was staying and knocked on the door. When it opened, the reporter's fave turned white and he said "You're dead!". "What are you talking about?" asked Eppridge. The reporter ten told him that he had received a phone call from Shelton telling him that Eppridge had been killed in a plane crash. Eppridge never found out if the crash was an accident, or if Shelton simply decided that he had revealed too much and wanted to get rid of the film and the photographer.