THE Magazine Review: "A Thousand Words: Masters of Photojournalism" 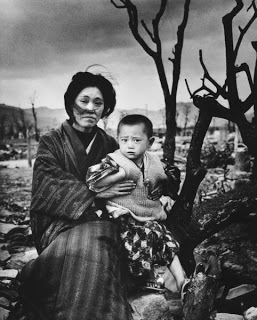 Mother and child in Hiroshima, four months after the atomic bomb dropped, 1945
Alfred Eisenstaedt ©Time Inc.
The September issue of THE magazine just hit the streets today, and it features a review of "A Thousand Words: Masters of Photojournalism". The exhibition continues through September 27.
©THE Magazine
Richard Tobin
Keepers of the Light— Is a picture worth a thousand words? That cliché is credited to a Fred R. Barnard writing for a trade journal in the early 1920s who popularized the sentiment in an article promoting the use of images in advertising on the sides of streetcars. He passed it off first as a Japanese, then as a Chinese proverb when he pitched it again six years later, changing it to “A picture is worth ten thousand words,” no doubt to justify a jump in advertising costs. Though this is probably the only adage not spoken by Kung Fu’s Kwai Chang Caine, the sentiment if not the sound bite can arguably be traced, in European culture at least, as far back as the Renaissance, when the first modern treatise on painting advanced the notion that an effective image speaks volumes (well, two volumes at the time, actually, the Iliad or the Bible).
Does that mean that a good photo should “say” what it would take a thousand or more words to convey? Consider the Civil War photographs that Matthew Brady staffer Alexander Gardner took of the young Union and Confederate dead who had fallen in a cornfield near Antietam in 1862, displayed for the American public the year before Lincoln’s address at Gettysburg. The grim Gardner photos achieve a mournful parity with the Gettysburg speech, whose two hundred and fifty or so words took Lincoln less than two minutes to deliver. The point is that what gives both image and text their lasting power to teach and to move us is their common quality of economy—or understatement—achieved by circumstance for the images, by intent for the text.
The Monroe Gallery’s current exhibition, A Thousand Words: Masters of Photojournalism, celebrates that quality of economy, or understatement. Some sixty prints by the likes of Alfred Eisenstaedt, Margaret Bourke-White, Robert Capa, and lesser-known masters make graphically evident what separates the run-of-the-mill photographer from the
seasoned photojournalist.
The exhibition’s black-and-white photographs cover the American scene from World War II to the mid-1970s, virtually all of them gelatin silver prints. As I am not a photographer I am not qualified to discuss the relative merits of the traditional process versus the new digital technology. From what little I’ve gathered, the quality of black-and-white gelatin silver prints, and palladium-platinum, for that matter, has been a challenge for digital photography, though a significant number of Magnum photojournalists now make use of the new technology. More to the point, the primacy of the gelatin silver print in pre-digital photography has made it something of a hallmark of good photojournalism. The gelatin silver print requires a sure command, gained with experience, of the formal aspects of the craft and their function in capturing the subject. Alfred Eisenstaedt’s image of the Hiroshima mother and child four months after the atomic bomb is a masterful composition in lights and darks demanded by the gelatin-silver process. That very formal mastery enables Eisenstaedt’s placement and setting of his two figures to tap into the Renaissance mother-and-child motif with great effect, transforming its conventional Raphaelite repose into the pathos of a sixteenth-century pietà.
Chance is said to play a key role in capturing an image that becomes “iconic.” Perhaps it is more accurate to say that what is critical is the training and experience to be in the right place at the right time, recognize the chance, and seize it. Cases in point here: Nick Ut’s untitled photograph of Vietnamese children fleeing an aerial napalm attack, John Filo’s Kent State J’accuse showing a young girl grieving over a slain student, and Stanley Forman’s The Soiling of Old Glory.
A parallel requirement for the photojournalist is an intuitive grasp of the momentous in the everyday moment, as in Bourke-White’s You Have Seen Their Faces, Carl Mydans’s Migrant Woman, Capa’s print of Henri Matisse in his studio, and Martha Holmes’s iconic photo of Jackson Pollock in his studio.
Perhaps the most significant role of the photojournalist in an age of sound bite and image manipulation is to force us to confront the timeless question, “What is truth?” Two Eisenstaedt photographs in the exhibition, from the close of World War II, speak to this role. One is a Rodinesque image of a sailor kissing a nurse taken in Times Square on VJ Day (Victory over Japan); the other is his mother and child photograph taken four months later in Hiroshima. Viewed in tandem, these images attest to the power of the medium to cut to the truth, and, in rare moments, to intimate its often
tragic complexity.
--Richard Tobin
‹ PREVIOUS   |   NEXT ›