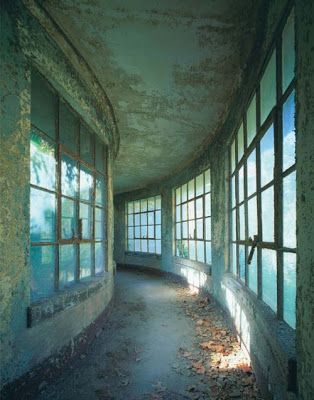 "Isolation Ward, Curved Corridor, Island 3, Ellis Island," is one of the 28 images on view at the Michener, made by Stephen Wilkes between 1998 and 2003, long after the facility had closed

Ellis Island figures in so many American family histories that any artist who addresses the last century's great wave of European immigration plugs into a ready-made constituency.


So it is with the 28 striking color images, now on display at Doylestown's Michener Art Museum, that New York photographer Stephen Wilkes made at the immigrant gateway between 1998 and 2003.

Wilkes worked not in the vast arrivals hall where the intrepid newcomers were processed but in the sprawling 29-building hospital complex. Here passengers who were either ill or pregnant were cared for until they healed, gave birth, or, in a tiny fraction of cases, died or were denied entry into the country and sent home.

Ellis Island closed in 1954, so by the time Wilkes arrived 44 years later the hospital buildings were in an advanced state of decrepitude. (Most have since been stabilized, to prevent further deterioration.)

Wilkes says he was struck so powerfully by the spirit of the place that he became obsessed, returning many times over five years to enrich his portfolio. Rather than being depressed by the physical decay, he was inspired by a residual spirit of humanity: "Mainly, I saw life."

The scenes he captured are of a type that will be familiar to anyone who has visited Philadelphia's Eastern State Penitentiary - empty rooms, peeling paint, drifts of dead leaves, vines insinuating themselves everywhere.

Occasional resonant artifacts such as shoes and an abandoned suitcase humanize these melancholy interiors; the most poignant image, though, is a reflection of the Statue of Liberty in a mirror.

Yet objects and symbols energize Wilkes' pictures less than the mellow, honey-colored light that floods many views. He photographed only with available light, which intensifies the romantic aura of the hospital complex that so enchanted him.

These lush, large-format prints function as canvases onto which viewers can project meditations about what their own forebears might have experienced.

Did they walk these deserted corridors, did they know firsthand the tuberculosis, measles, or isolation wards, could they see the Statue of Liberty from their window, were they consumed by anxiety about whether they would escape the hospital into America proper?

By contrast, Lewis Hine's black-and-white photographs made during Ellis Island's heyday, from 1905 to the mid-1920s, show a more benign, even hopeful immigrant situation.

The Michener has placed 15 of these documentary photos at the core of the exhibition, separate from Wilkes' pictures, which wrap around them in counterpoint.

A prominent social activist remembered for photographing blue-collar workers and egregiously exploited child laborers, Hine introduces us to immigrants such as an "Italian Madonna" whose child gazes at her beatifically.

The "Madonna" and a portrait of a soulful Armenian Jew typify Hine's tendency to gild reality with a softening glaze of sentimentality. Instead of the tumult and bureaucratic bustle of Ellis Island, Hine shows us individuals apparently chosen as exotic, representative types.

"Ellis Island: Ghosts of Freedom" is a curatorial construct that juxtaposes "then" against "now." Yet the pairing works because each photographer has created a historical document about the renewal of lives and the importance of remembrance.


The exhibition continues through October 10. See the full Ellis Island collection here. Monroe Gallery of Photography will host Stephen Wilkes in October for a special presentation, exhibition, and book signing of Ellis Island: Ghosts of Freedom. Watch this blog for more details.