The Story of Richard and Mildred Loving 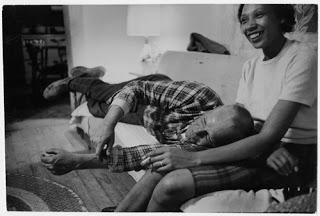 Photograph by Grey Villet
Richard and Mildred Loving laughing and watching television
in their living room, King and Queen County, Virginia, 1965
Exhibit of Photographs Coincides with Feature Film “Loving” Premiere
Santa Fe--Monroe Gallery of  Photography, 112 Don Gaspar, is pleased to exhibit  LIFE magazine photographer Grey Villet's intimate images of an interracial couple, Richardand Mildred Loving, who married and then spent the next nine years fighting for the right to live as a family in their hometown. Their civil rights case, Loving v. Virginia, went all the way to the Supreme Court, which in 1967 reaffirmed the very foundation of the right to marry. Grey Villet’s photographs are on exhibit November 1 – December 21, 2016.

On November 4, the feature film “Loving” opens, from acclaimed writer/director Jeff Nichols and starring Joel Edgerton and Ruth Negga in the roles of Richard and Mildred Loving.

The families of Richard Perry Loving and Mildred Delores Jeter had lived in Caroline County, Virginia for generations. Richard first met Mildred while listening to her brothers play music at the Jeters’ home. They dated for a few years before deciding to marry. Interracial marriage was illegal in Virginia and in twenty-five other states. For this reason, on June 2, 1958, Richard brought to his bride-to-be to Washington, D.C., where there were no racial bans on marriage.

Based on an anonymous tip that the Lovings were illegally living as a married, sheriff Garnett Brooks and two deputies burst into the Lovings’ bedroom on July 11, 1958 at 2 a.m. When Richard explained that the woman in bed with him was his wife, Brooks replied, “Not here she’s not.” They were arrested for unlawful cohabitation and both pled not guilty. Richard only spent one night in jail while Mildred had to spend four; Richard was told that he would be put back in jail if he tried to bail out his wife.

In October 1958, the grand jury of the Circuit Court of Caroline County charged the Lovings with violating two sections of Virginia’s 1924 Racial Integrity Act. Because Richard was white and Mildred was African American and Native American, their marriage was illegal and a felony offence in Virginia.

On January 6, 1959, the Lovings pleaded guilty to the felony charge of miscegenation and Judge Leon M. Bazile sentenced them to one year in prison. The sentence was suspended if the Lovings agreed to be banished from Virginia for twenty-five years. On appeal, Bazile refused to set aside his original verdict, thereby propelling the Lovings’ case toward the U.S. Supreme Court, stating, “Almighty God created the races white, black, yellow, Malay, and red, and he placed them on separate continents. And but for the interference with his arrangement there would be no cause for such marriages. The fact that he separated the races shows that he did not intend for the races to mix.”

From Chief Justice Earl Warren’s 1967 unanimous opinion:
"Marriage is one of the "basic civil rights of man," fundamental to our very existence and survival. To deny this fundamental freedom on so unsupportable a basis as the racial classifications embodied in these statutes, classifications so directly subversive of the principle of equality at the heart of the Fourteenth Amendment, is surely to deprive all the State's citizens of liberty without due process of law. The Fourteenth Amendment requires that the freedom of choice to marry not be restricted by invidious racial discriminations. Under our Constitution, the freedom to marry, or not marry, a person of another race resides with the individual, and cannot be infringed by the State."

In an era before any digital tinkering with results was possible, Grey Villet’s technique was one that required intense concentration, patience and understanding of his subjects joined with a technical mastery that allowed rapid use of differing cameras and lenses to capture and compose the "right stuff" on film as it happened. “RIGHTS, RACE & REVOLUTIONS:A Portrait of LIFE in 1960s America by Grey Villet” was exhibited at the Museum at Bethel Woods April 2 – December 31, 2016. Grey Villet died in 2000.
Gallery hours are 10 to 5 Daily, admission is free. Visit www.monroegallery.com for more information.