"This is the icon of the century, this flag” 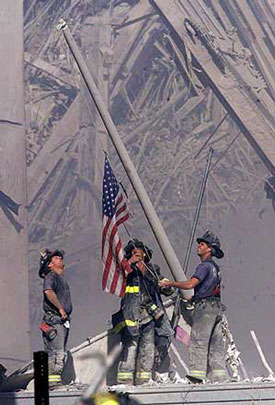 ‘THE FLAG’ Pursues the Mystery of a Missing 9/11 Icon

The First Commissioned CNN FILMS Documentary Debuts Wednesday, September 4
The first original production commissioned for CNN FILMS, THE FLAG, directed by Michael Tucker and Petra Epperlein, follows the mysterious journey of the American flag featured in one of the most iconic photographs taken at the World Trade Center on September 11, 2001. The 90-minute film is based upon the forthcoming book by David Friend, Vanity Fair’s editor of creative development and formerly LIFE magazine’s director of photography (The Flag, August 27), and will debut Wednesday, September 4, at 9:00pm, 10:30pm, and 1:00am. All times Eastern.

A vibrant American flag, flying from the back of a boat moored very near the Twin Towers, managed to survive the destruction of the World Trade Center 12 years ago. Someone removed the flag from the boat on September 11th. Thomas Franklin, a photographer for the New Jersey newspaper The Record, took a searing photograph of that flag as it was raised by three fire fighters above the smoldering rubble on the evening of the terrorist attacks. That image immediately became one of the archetypical photographs of the disaster.

Shortly after the iconic photo was taken, the whereabouts of the original flag became a mystery. Who would keep it – and why?

The flag that toured the country to reassure the nation, flew over Yankee Stadium as a patriotic rebuke to terrorism, and flew over the USS Roosevelt as the battleship carried troops to Afghanistan in response to the attacks, was represented as the same flag that was raised at Ground Zero. It turns out the original flag disappeared shortly after it was photographed.

Tucker and Epperlein interviewed the owners of the original flag, Shirley Dreifus and Spiros Kopelakis. They reveal key details about their flag that distinguish it from the imposter.

“That’s not the flag that they raised on 9/11. The flag that went to Yankee Stadium, or was on the ship [the USS Roosevelt], could not have been the flag that was in the photograph,” Dreifus says in the documentary.

Former New York City Mayor Rudolph Giuliani, as well as fire fighters, police officers, photographers who were at Ground Zero, the makers of the flag, editors who used the Franklin photograph, and others, all speak about their memories of that day for the documentary. Each discusses also his memories of the famous flag.

“I see the rebuilding starting with that photograph,” Giuliani says. “That was the moment on which, these three fire fighters, speaking for all New Yorkers – and all Americans – said: ‘Enough is enough. We’re going to fight back.’”

Tucker and Epperlein try to solve the mystery of the flag’s journey. Along the way, their interviews with key eyewitnesses from 9/11 reveal moving insights into the tragedy – and, highlight the enduring power that imagery holds for healing and national reconciliation that, for some, the original flag still represents.

“This is the icon of the century, this flag,” Kopelakis says emphatically, “and it is not any excuse, from any politician, not to try to find this flag.”

As an original production for CNN FILMS, THE FLAG will air exclusively on CNN. It is the fourth CNN FILMS broadcast. ESCAPE FIRE, GIRL RISING, and OUR NIXON debuted earlier this year. CNN FILMS will mark its first anniversary in October 2013.

About CNN FILMS
CNN Films brings documentaries beyond the small screen by developing strategic partnerships to leverage distribution opportunities at film festivals and in theaters. Amy Entelis, senior vice president of talent and content development for CNN Worldwide, and Vinnie Malhotra, senior vice president of development and acquisitions for CNN Worldwide, oversee the acquisition strategy of documentaries for CNN Films. Malhotra manages the day-to-day operation of CNN Films, and works directly with filmmakers to develop original projects.
About CNN

CNN Worldwide is a portfolio of two dozen news and information services across cable, satellite, radio, wireless devices and the Internet in more than 200 countries and territories worldwide. Domestically, CNN reaches more individuals on television, the web and mobile devices than any other cable TV news organization in the United States; internationally, CNN is the most widely distributed news channel reaching more than 271 million households abroad; and CNN Digital is a top network for online news, mobile news and social media. Additionally, CNN Newsource is the world’s most extensively utilized news service partnering with hundreds of local and international news organizations around the world. CNN is division of Turner Broadcasting System, Inc., a Time Warner Company.