Via The Harvard Gazette

In her recent book and accompanying exhibition, "Devour the Land" — honored at the 2022 PhotoBook Awards — curator Makeda Best considers how photographers have responded to the U.S. military's impact on the environment since the 1970s.

Below, the Richard L. Menschel Curator of Photography at the Harvard Art Museums walks us through a few of the images she selected. (Full post here) 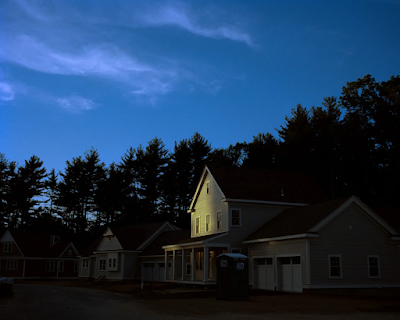 Nina Berman's photograph was made in nearby Concord. Made at sites across the country, Berman's series "Acknowledgment of Danger" takes its title from a waiver visitors must sign before entering the toxic grounds of a former military facility. In Concord, she photographed a new housing development in early morning light. Concord is known for its connections to the Revolutionary War and to the U.S. environmental movement. (The pictured site is six miles from Walden Pond, made famous by Henry David Thoreau's 19th-century nature writing.) Here, Berman draws out this site's link to modern warfare: Starmet Corp. (formerly Nuclear Metals Inc.) manufactured products from depleted uranium, primarily for armor-piercing ammunition, among other things. The company discharged toxic waste into an unlined holding basin for nearly 30 years, contaminating the soil and groundwater. In 2001, the facility was placed on the National Priorities List, an EPA registry of the nation's most hazardous sites. "A Resident Talks to Workers in the Hunter's Point Neighborhood of San Francisco, Calif., on May 5, 2017." From the series "Bombs in Our Backyard" by Ashley Gilbertson, Australian (b. Melbourne 1978). © Ashley Gilbertson/VII; image courtesy of the artist

It was important to me that the exhibition speak to the fact that communities of color are disproportionately impacted by this pollution and toxicity. Ashley Gilbertson made this photograph in a neighborhood in my hometown of San Francisco, called Hunter's Point. The neighborhood was largely built on a former naval base, today a Superfund site. Growing up, I knew kids who lived here — heard them talk about their eczema and asthma. In 2017-18, Gilbertson, a contributor to the catalog, acclaimed for his photographs of conflict in the Middle East, turned his attention to the U.S., documenting pollution caused by the military for the investigative journalism nonprofit ProPublica. Gilbertson collaborated with journalist Abrahm Lustgarten (another contributor to the catalog) to produce a series of in-depth reports on the pollution from former chemical weapons test sites and the harmful ways the military has chosen to dispose of chemicals and munitions. In his larger series, Gilbertson shows how people and toxins intersect — from illness to activism to labor and daily life in a poisonous environment.