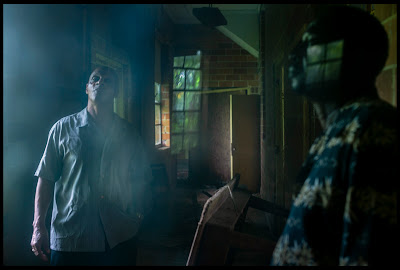 Nina Berman: John Bonner and Richard Huntly, from the series The Black Boys of Dozier, 2013

Thousands of boys, mainly black, passed through Dozier since it opened in 1901 as a reform school for wayward boys. But allegations over the years suggest it functioned more like a slave labor camp, with verified reports of children being hog tied and shackled. The name of the institution changed as each successive administration installed its own brand of punishment and forced labor, finally closing in 2011, not because of allegations, but according to the State, because of budget issues.

Panel discussion Thursday, January 12 with artists featured in Poor People's Art: A (Short) Visual History of Poverty in the United States, including Nina Berman, Rico Gatson, and Jason Lazarus. Curator Christian Viveros-FaunÃ© will lead the conversation exploring issues and topics addressed in the exhibition. This event is free and open to the public, Facebook live link here.

Dr. Martin Luther King Jr. is well known for his "I Have a Dream" speech, yet much less emphasis is placed on his campaign to seek justice for America's poor, "The Poor People's Campaign." This was a multi-cultural, multi-faith, multi-racial movement aimed at uniting poor people and their allies to demand an end to poverty and inequality. Fifty-three years after Dr. King's death, the Reverend William Barber II launched a contemporary push to fulfill MLK's ambitious brief — one that calls for a "revolution of values" that unites poor and impacted communities across the country. The exhibition Poor People's Art: A (Short) Visual History of Poverty in the United States represents a visual response to Dr. King's "last great dream" as well as Reverend Barber's recent "National Call for Moral Revival."