A Day in the LIFE

Former senior editor of LIFE magazine, Hal Wingo remembers the afternoon of Nov. 22, 1963 vividly. He was working as a reporter in the publication’s Big Apple headquarters and was walking back from lunch.

Wingo recalls how the Time & Life Building, one of the four original structures in Rockefeller Center, was one of few tall buildings on the block. Its neighbors were all “itty-bitty” two to three story-tall buildings filled mostly with electronic retailers selling radios and black and white TV’s.

“I was walking back up Sixth Avenue and I noticed all these people standing in front of the windows of these shops,” Wingo says. “I got up close and I saw they were all watching this broadcast saying the president had been shot.”

He then set “the world speed record from 47th to 50th Street,” and upon arriving at his workplace, was immediately dispatched to Washington DC.

“When Dick and I talk about these things, I’ve always said that every person with a memory that reaches back that far can stand up and tell us exactly where they were and exactly how they heard that the president had been killed.” He pauses and takes a sip of coffee. “Our story is no different, it’s just that we were closer to it, but everyone shared the experience.”

Dick is Wingo’s colleague Richard Stolley, who at the time served as the magazine’s Los Angeles bureau chief. Stolley was alerted of the news via AP Teletype and not an hour later  was on a plane to Dallas working on a tip that a local businessman by the name “Za-proo-dur” had captured that precise moment of the president’s motorcade on film.

In a swift move and amongst cutthroat competition, Stolley secured the 26-second clip he calls “the most famous home movie in American history” for $50,000.

“He’s the man,” Wingo gushes. “There’s no getting around that’s the most important thing LIFE ever published.”

The pair, who later teamed up to launch People magazine, and who, by a twist of unrelated events moved to Santa Fe, join forces on Friday for a presentation at the Lensic titled From Zapruder to Taskim Square: Media and Culture in the 21st Century.

The intention, Wingo says, is “to turn this—from just a total reflection—to thinking about where are we now and where do we go from here, in terms of events in the future and how they get handled, reported and treated by the media.”

A week later, Stolley is set to sign copies of LIFE: The Day Kennedy Died at Monroe Gallery.

“We’re in that pivotal sphere, I think, in terms of everything being different,” Wingo says. “We live in a world dominated by Julian Assange and Snowden. There are no secrets; it’s just a different world—a totally different world.”

With today’s ever-competing 24-hour news channels and sharing at the push of a button, Wingo notes how  the information panorama has changed dramatically since the faithful Texas afternoon.

“People stayed glued to their TV sets all weekend and never once saw a single picture of what happened, because it was in the Zapruder film only and that came out in LIFE magazine on Monday.”

At the time, Wingo says, the move to pull an already printed product and replace it with a revised one was nothing short of Herculean.

“You gotta remember, the assassination occurred on a Friday,” he says. “The magazine had closed on the Wednesday before that. We were done; it was on trucks being sent out around the country.”

So, the issue featuring Heisman Trophy-winner Roger Staubach was pulled and replaced over the weekend.  Short on time, the magazine published the film’s stills in black and white.

“What you see in that issue of LIFE are grainy, black and white frames and you think, ‘Really?’ but that’s it, that’s the record,” Wingo says.

Accidentally, the move created the need for instant information in the pre-Internet age. “It was the first time that had ever happened and from that day forward, the reading public expected that if something big happened, you’d get it in LIFE next Monday.”

He chuckles, “We put enormous pressure on ourselves in the process. It was a tuning point, both for what were doing, and I think, in many ways, for the way that people in the country looked at the events of our time.”

In what now would be considered the definition of an atypical media move, the magazine withheld publishing the infamous frame 313—which shows the exact moment the president’s crown is blown away—out of respect  to the family and the American people.

“Can you imagine that happening today? Number one, if anybody got killed in any kind of public setting like that, there’d be 10,000 of these things,” Wingo says, picking up his cell phone. “Frankly, if we’d had those back then, we wouldn’t have as many conspiracy theories as we have today, because there’d be much more evidence. But back then, there was only one record.”

As a matter of perspective, Wingo considers the presidential assassination “more personal” in the American fiber than the terrorist attacks of Sept. 11.

“9/11 was beyond imagination in its horror,” he reflects. “But not personal in the way that losing this one person who so many people admired and attached great hope to.”

FROM ZAPRUDER TO TASKIM SQUARE   7 pm Friday, Nov. 22. Free.
The Lensic, 211 W San Francisco St.,
988-7050
LIFE: THE DAY KENNEDY DIED SIGNING  5-7 pm Friday, Nov. 29. Free.
Monroe Gallery of Photography
112 Don Gaspar Ave., 992-0800
Related:
“I had no idea what else was available, but I knew Life had to have it.”
The Hartford Courant: JFK Assassination: The Zapruder Film, Life Magazine And A Gentleman's Deal
LIFE photographer Bob Gomel Got Closer Than He Wanted to JFK Funeral
Save the date: November 29 - Book signing with Richard B. Stolley "The Day Kennedy Died" 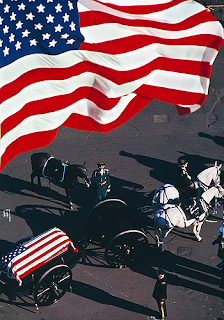