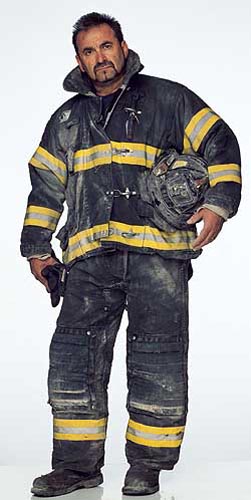 Louie Cacchioli
Firefighter, Engine 47, FDNY
Rescued many from Tower No. 1
"I stepped outside after bringing about 40 or 50 people down a stairway. I looked around. It was crazy. Somebody yelled, 'Look out! The tower's coming down!' I started running. I tossed my air mask away to make myself lighter. Next thing I know, there's a big black ball of smoke. I threw myself on my knees, and I'm crying. I said to myself, 'Oh, my God, I'm going to die.' I was crawling. Then—the biggest miracle thing in the world. My hands came onto an air mask. It still had air. Another 15 seconds, I wouldn't have made it."

Joe McNally created “Faces of Ground Zero, Portraits of the Heroes of September 11, 2001” during the first devastating weeks after September 11, 2001.  Joe McNally set up his portrait studio at MOBY C in lower Manhattan. This unique large-format camera is a room sized camera, with a U2 spy plane lens that produces a 9 foot print. The collection of over 200 photographs was exhibited at 7 venues throughout 2002; followed by a special appearence in the exhibition "Icons" at Monroe Gallery of Photography.

The Faces of Ground Zero/Giant Polaroid Collection is perhaps the most significant artistic response to and documentation of the tragedy at the World Trade Center. The traveling exhibition tour, which commenced at Vanderbilt Hall, Grand Central Terminal, New York City and traveled on to the Boston Public Library, the Royal Exchange in London, Union Station in Chicago, One Market in San Francisco, the Skirball Center in Los Angeles, and concluded at Rockefeller Center in New York City, was seen by almost a million viewers. The exhibits and the book, printed by LIFE, helped raise approximately $2 million for the 9/11-relief effort.

Joe McNally says he is still flabbergasted by his subjects' trust in him. "They took a leap of faith when they agreed to be photographed. I promised each of them to treat the images with respect." 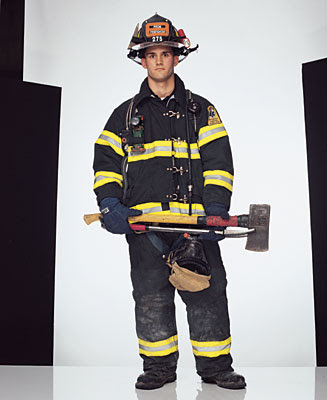 Jason Cascone
Firefighter, Ladder 9, FDNY
Jason finished his training on September 10, 2001. The next morning his mother woke him up and said there was a fire at the World Trade Center. He remembers being transported to his first assignment with 50 other firefighters. "There was this chaplain on the bus and he was giving absolution to everyone." 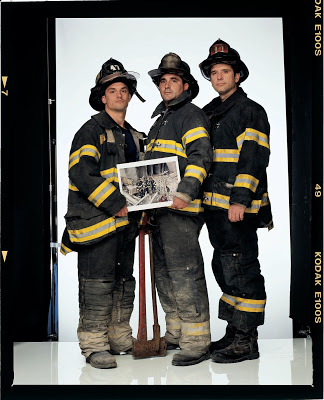 Richard, Patrick, and Peter Gleason
Firefighters, FDNY, Engine 47; Battalion 14; and retired
Patrick was working when the alarm came in. His brothers Richard, who was off-duty, and Peter, who was retired, geared up to join the effort. "After retiring I went to law school. A professor there, Kit Chan, had an office on the 79th floor of  Tower 1," said Peter. "After the first plane hit, I called and told him to get out of the building. He called the next day to thank me for saving his life. He did, however, say he was a little confused, since six months earlier over lunch we spoke about what to do in the event of a high-rise fire, which is to stay put while the fire is extinguished". 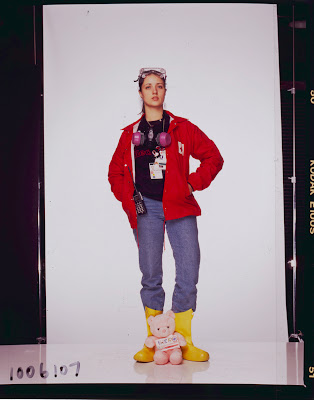 Melissa van Wijk
Choreographer and Red Cross Volunteer, Disaster Services
Van Wijk worked at aid areas that distributed food and offered showers and beds to workers. "The first day I was there 20 hours, then I took a nap and went back. That's what everybody did. It was chaotic. Everything that didn't fit into someone else's job fell to us."
"The people represented on the pages of this book are, by and large, ordinary people. they go to work, to school, to church. On an average day in New York City (if there is such a thing) you would pass hundreds of people just like there. They live their lives. They do their jobs.

That is what they would tell you of their involvement in the tragedy called 9/11: They did their jobs. They did what they were supposed to do - as human beings, as citizens, as New Yorkers." -- Joe McNally