To Do in NYC Wednesday: Photojournalists On War Conversation and Book Signing 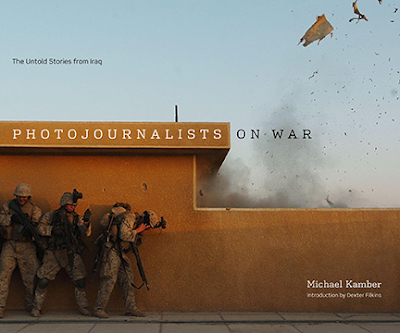 "Photojournalists on War: The Untold Stories from Iraq [is] required reading for anyone interested in the way news is gathered and disseminated these days ... Kamber was another one of those eyes in Baghdad, so these conversations are remarkably candid -- confidences shared among friends that we're privileged to be listening in on." -- Vince Aletti, Photograph, July/August 2013
COINCIDING WITH PUBLICATION OF
MICHAEL KAMBER'S ACCLAIMED NEW BOOK ON THE IRAQ WAR
BROOKLYN BREWERY
WITH WAR CORRESPONDENTS AT THE BROOKLYN BREWERY
PRESENT:
PHOTOJOURNALISTS ON WAR:
THE UNTOLD STORIES BEHIND THE HEADLINES
A CONVERSATION WITH
STEVE HINDY AND MICHAEL KAMBER
WEDNESDAY, JULY 10, 7:30 - 10:00 P.M.

Ticket includes admission and a free Brooklyn Brewery beer.
All proceeds from event benefit RISC
( Reporters Instructed in Saving Colleagues).
Ticket price is $15.00. To purchase a ticket, go here.
Copies of the book will be on sale and available for signing

With never-before-seen work from the world's top photographers, Michael Kamber's new book Photojournalists on War: The Untold Stories from Iraq (University of Texas Press) features a groundbreaking visual and oral history of America's nine-year conflict in the Middle East. Influenced by his own experience as a multimedia pioneer, Kamber set out to interview photojournalists from leading news organizations including Agence France-Presse, the Associated Press, the Guardian, the Los Angeles Times, Magnum, Newsweek, The New York Times, Paris Match, Reuters, Time, The Times of London, VII Photo Agency, and The Washington Post. In his book, he recounts their first-person, frontline reports of the war as it unfolded, including key moments such as the battle for Fallujah, the toppling of Saddam's statue, and the Haditha massacre. These hard-hitting accounts and photographs reveal the inside and untold stories behind the headlines in Iraq.

On July 10, Brooklyn Brewery founder and former AP foreign correspondent Steve Hindy will interview Kamber about his career and his mission to create the most comprehensive collection of rare eyewitness accounts of the Iraq War to date. Both men will reflect on the often shocking and sometimes heroic actions that journalists undertake in trying to cover the war, as they discuss the role of media and issues of censorship. The conversation will be followed by a book signing.

Michael Kamber has worked as a writer and photojournalist for 25 years. Since September, he has worked primarily as a conflict photographer, covering a dozen conflicts, including Afghanistan, Somalia, Liberia, Darfur, and the Congo. Kamber worked as The New York Times' chief photographer in Baghdad in 2007, the bloodiest year of the Iraq War. He also covered Iraq for the Times in 2003, 2004, 2008, 2009, 2010 and 2011. As one of the first journalists to routinely file photography, video and written articles from overseas, Kamber helped pioneer the use of multimedia. Photojournalists on War is the result of a five-year oral history project documenting the role of photojournalism and the Iraq War. Kamber is the founder of the Bronx Documentary Center, and is the recipient of the World Press Photo, and many other awards.

Steve Hindy is a former journalist and became interested in homebrewing while serving as a Beirut-based Middle East Correspondent for The Associated Press. He is a co-founder of The Brooklyn Brewery.