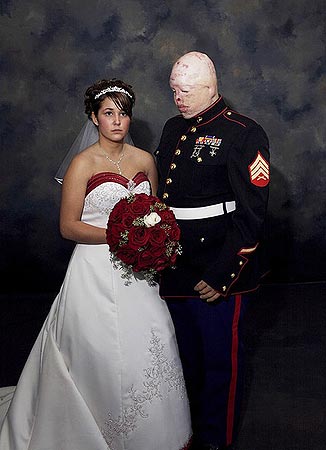 Q: How, and when, did the idea of the WAR/PHOTOGRAPHY exhibit come about?

A: In 2002, the museum acquired the print of Joe Rosenthal’s flag rising on Iwo Jima that is reliably thought to be the first print made from the negative. Rosenthal took it on a Friday, the negatives were sent to the big lab on Guam to be processed and then passed by censors and the man who developed the negative made a print for himself.
Will Michels, a photographer who works for the Museum of Fine Arts, Houston, came to me to talk about that print. For 10 years before coming to MFAH, Will was the restoration architect on the USS Texas battleship and in talking to World War II vets on the USS Texas during Iwo Jima, they talked about seeing the flag raised.
That discussion led to a small show of conflict photographs that the museum already owned, to more discussions about what we should acquire, and eventually to the decision to do an exhibition on the history of war photography


(click above link for full article and slide show)