Via Cowboys and Indians magazine

A new book of the photographs of Guy Gillette captures decades of ranch life in small-town East Texas.

Photos from A Family of the Land: The Texas Photography of Guy Gillette, University of Oklahoma Press.

Guy Gillette liked to tell a good story, whether it was on stage in his younger days as an actor or behind the camera during his long career as a famed photojournalist. By the time Gillette died last August at age 90, his images had appeared in high-profile magazines, books, and exhibitions. He had covered the Korean War, the civil rights movement, and Vietnam War protests. And he had photographed countless celebrities, including Elvis Presley, Audrey Hepburn, Queen Elizabeth II, and President Dwight D. Eisenhower.

But it was in ordinary country living in rural Houston County, Texas, that Gillette found some of the best stories through his viewfinder. Decades of photographs he took there dating from the 1940s are the subject of the new book A Family of the Land: The Texas Photography of Guy Gillette. 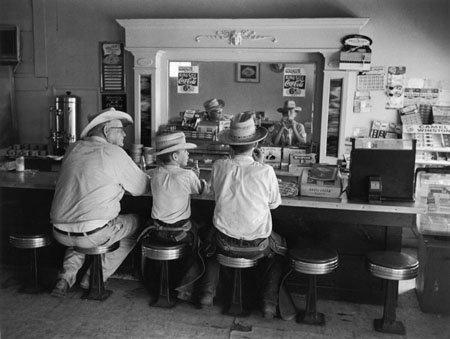 Arnolds, Cafe, Lovelady, Texas, 1956
﻿
Click here for slide show.
Gillette came to know the Piney Woods of Southeast Texas by way of New York. Born in Minneapolis, he initially wanted to become an actor and moved to New York to pursue the stage. While a student at the Michael Chekhov Acting Studio, he got work as a busboy at a vegetarian diner, where he met Doris Porter, an aspiring fashion designer from Texas supporting herself waiting tables. The two fell in love, married, and soon began a long series of summer trips from their home in New York to Doris’ family ranch in Houston County.

Gillette had taken up photography as a hobby, and he found the Porter Place — the ranch Doris’ father, Hoyt Porter, had assembled as a young man — and the neighboring small towns of Crockett and Lovelady great ground for practicing the kind of unassuming picture-taking that would become the hallmark of his work. Seeing those early images, a friend in New York encouraged Gillette to follow photography.

“In a good photograph, something happens,” Gillette once said, and in Houston County, there was always something happening to train his lens on. On Saturdays, folks turned out to walk around town. There were domino games at the garage. Church homecomings and Bible school. Boot shining and porch conversations. Potlucks and hymn sings. And there was all that went with ranch work and the schooling of Gillette’s two young sons — Guy Porter and Pipp (they would grow up to make award-winning cowboy music as the Gillette Brothers) — in working cattle and riding horses. There were quiet times of cooking breakfast on the range and of cooling off at the water hole. And every now and then there was an emergency, like a tense trip to the vet when a favorite cow dog got its leg broken.
Edward Steichen, who was reportedly moved to tears by an image of a young Guy Jr. looking into the eyes of his injured dog on the vet’s table, chose two of Gillette’s images for the famous Family of Man exhibition. But if some saw art in his photographs, Gillette saw simple, true stories. “Though photography is often called art,” he said, “I have wanted to be artless: to be a documentarian, not an artist.”

Asked to describe what photography meant to him, Gillette struggled for a pithy explanation. If he had a philosophy, he held with the French photographer Brassaï: “I do not look for exceptional subjects. I avoid them,” Gillette said. “I think it is daily life that is the great event, the true reality.”
Telling the simple truth of those stories occupied Gillette his entire life. “It is why I have enjoyed watching the people of Houston County, seeing them through a camera’s viewfinder.”

A Family of the Land: The Texas Photography of Guy Gillette (University of Oklahoma Press, 2013) by Andy Wilkinson is available at www.oupress.com.